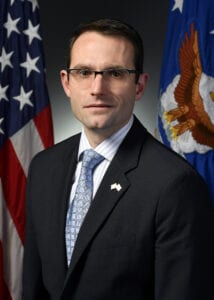 Dr. Will Roper is the Assistant Secretary of the Air Force for Acquisition, Technology and Logistics. Photo: Air Force

“Within the [U.S.] Space Force, we’re already working on the first two eSats, hoping to bring this technology into space,” he said.

The Air Force declined to comment further on details of the eSat effort after Roper’s address.

In her kick-off address to AFA’s vASC conference on Monday, U.S. Air Force Secretary Barbara Barrett named the Boeing and Saab Red Hawk training aircraft as the first system to carry the “e” prefix designating digitally engineered systems. The plane will now be known as the eT-7A, though the service has said that an “e” designation may go away once a program moves into production. E-systems could range from aircraft and drones to satellites and the Ground-Based Strategic Deterrent (GBSD).

Digital engineering, as used in the commercial world, such as designing Formula One racing cars, has been a stated priority for Air Force acquisition chief Will Roper, as the service seeks to save time and money through end-to-end computer testing before bending metal and as the service seeks to expand its industrial supply base beyond a handful of well-established primes to start-up companies as well. For years, DoD officials have lamented that sustainment of legacy systems robs modernization efforts.

“Right now, 70 percent of every dollar we spend is trapped in a part of acquisition where we have yeoman airmen and space professionals that keep legacy systems operating, but it consumes our budget,” Roper said. “It is such a big force that it limits our ability to create new and dominant things, and we’ve been stuck here since the Cold War.”

“One rule that we’re currently obeying is this vicious circle we’re ben trapped in especially in aircraft procurement since the late ’70s,” he said. “We don’t compete things very often. It’s unusual for us to start a new program for a fighter, a bomber, or even a major weapon or a satellite. When the programs are so few and far between, they become must win events for industry. They put so much of their own money on the table so that they can win. In many cases, it’s existential that they do. Once they put their own money on the table, they have to get it back in sustainment so we get sustainment-dominant business cases.”

“We will not compete against nations like China and Russia, if we are trapped in this vicious circle,” Roper said. “We have to find a way to break it and create a new circle where most of our work is in design and production, building a cutting-edge military that can deal agilely with all the forces that could come to bear on the battlefield.”