Maxar Exec on the Company’s US Government Strategy

One of the United States government’s priorities in improving its satellite capabilities revolves around more effectively providing persistent Intelligence, Surveillance and Reconnaissance (ISR). According to Rob Zitz, who joined Maxar Technologies Holdings as senior vice president and chief strategy officer of SSL’s government systems division earlier this year, this focus on ISR has become a key tenet of company’s strategy to grow its business within the U.S. government market.

“By persistence I mean being able to watch an event as it unfolds, to understand relationships between events so an analyst or action taker has more information to respond to or act upon,” Zitz said in an interview with Via Satellite. “And they want to be able to use similar persistence across a host of different topics, not just counterterrorism.”

Zitz pointed out that airborne persistence has become a critical element of military and intelligence operations, particularly for but not exclusive to managing the threat of global terrorism. The need for that capability has expanded to space as well, following the White House’s 2010 national space policy that highlighted the risks of operating within a contested space environment. “Since then, our customers have now understood that space is no longer a protected enclave,” Zitz said. “We’ve seen a shift in the government in terms of what they need on orbit.” 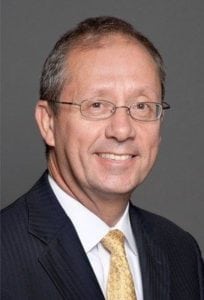 More specifically, agencies such as the Department of Defense (DOD) have announced a shift in funding and investment toward Space Situational Awareness (SSA), as well ensuring resilience of communications in the event a space asset is lost. “That drives us toward the idea of smaller, affordable, yet still capable satellites,” Zitz said. “However, that’s just one part of the equation.”

The other part, Zitz said, is increased demand for more hands-off data processing. Government agencies want the enormous amount of data that comes from space to be automatically “reviewed, understood, correlated and merged with other sources of information,” Zitz said, thus saving precious time and man-hours.

As such, Zitz believes much of the growth within the government vertical will come from providing more holistic end-to-end solutions. “Many customers will say they don’t just want to purchase pixels — they want answers,” he said. “They’re looking for companies that can not only collect enormous amounts of data but who have ideas and capabilities that can then more effectively merge, collect, and run change detection with that information.”

Zitz said that the recent acquisition of DigitalGlobe by Maxar Technologies (formerly MacDonald, Dettwiler and Associates, or MDA) puts the newly formed company in a suitable position to satisfy these demands. According to Zitz, the two companies combined have a greater ability to do image processing and analytics. “People who are interested in very high quality unclassified imagery to support intelligence operations rely on DigitalGlobe and they have for a number of years,” he said. “So we think this is going to be a complementary combination of … our government work that we’ve done for Canada in the Synthetic Aperture Radar (SAR) arena, and the electro-optical work that DigitalGlobe has been doing for the U.S. government.”

According to Zitz, one of the U.S. government’s priorities is enhancing and augmenting existing architectures as a first step to improving ISR persistence and resilience. He highlighted the Defense Advanced Research Projects Agency’s (DARPA) Robotic Servicing of Geosynchronous Satellites (RSGS) as one program working toward that goal. SSL has partnered with DARPA on that project, which focuses on Geosynchronous Earth Orbit (GEO), while NASA simultaneously pursues Restore-L, a similar on-orbit servicing concept that focuses on Low Earth Orbit (LEO).

Zitz added that he foresees the government opting to use smaller satellites in Non-Geosynchronous Earth Orbits (NGSO) for a variety of reasons, but most prominently to achieve lower costs. “A large, heavy satellite requires a large, heavy launch vehicle, which is in and of itself expensive,” he said. “Smaller is [also] harder to find and hit if someone’s trying to attack your satellite architecture.”

However, SSL will continue to provide both small and large satellites as it traditionally has because Zitz believes there will still be a strong market for GEO assets.

“The number of satellites awarded per year is not necessarily going to be the metric going forward. It’s going to be more the value of each award,” he said. “It’s really going to be a mix of GEO and LEO, and we feel that we’re positioning ourselves well to stay ahead of the technology in these arenas.”