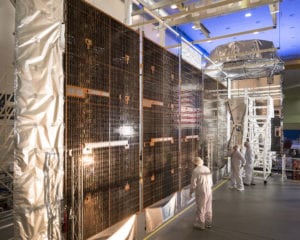 [Via Satellite 06-11-2016] The U.S. Navy reports that the fifth satellite in the Mobile User Objective System (MUOS), successfully launched June 24 aboard an Atlas 5 rocket, has experienced an anomaly that required its transfer maneuver to be temporarily halted.

MUOS 5 was projected to reach geosynchronous orbit and enter its test location 22,000 miles above Hawaii by July 3. Following the anomaly, the Navy’s Program Executive Office for Space Systems reconfigured the satellite from orbital transfer into a stabilized, safe intermediate orbit to allow the MUOS team to evaluate the situation and determine options for proceeding.
MUOS 5 is an on-orbit spare for immediate redundancy in the MUOS constellation. The Navy reports that the other four satellites in the constellation are performing nominally. The delay in MUOS 5 reaching its test location will have no impact upon current legacy or Wideband Code Division Multiple Access (WCDMA) satellite communications operations.

The MUOS network provides “smartphone-like” telecommunications services with near-global coverage, and enables 16 times more communications capacity than the legacy system it will eventually replace. Lockheed Martin is the prime contractor for MUOS.

“Nothing is more important to Lockheed Martin than mission success,” the company commented in a statement provided to Via Satellite. “We are working closely with our Navy customer to determine the cause of the anomaly.”