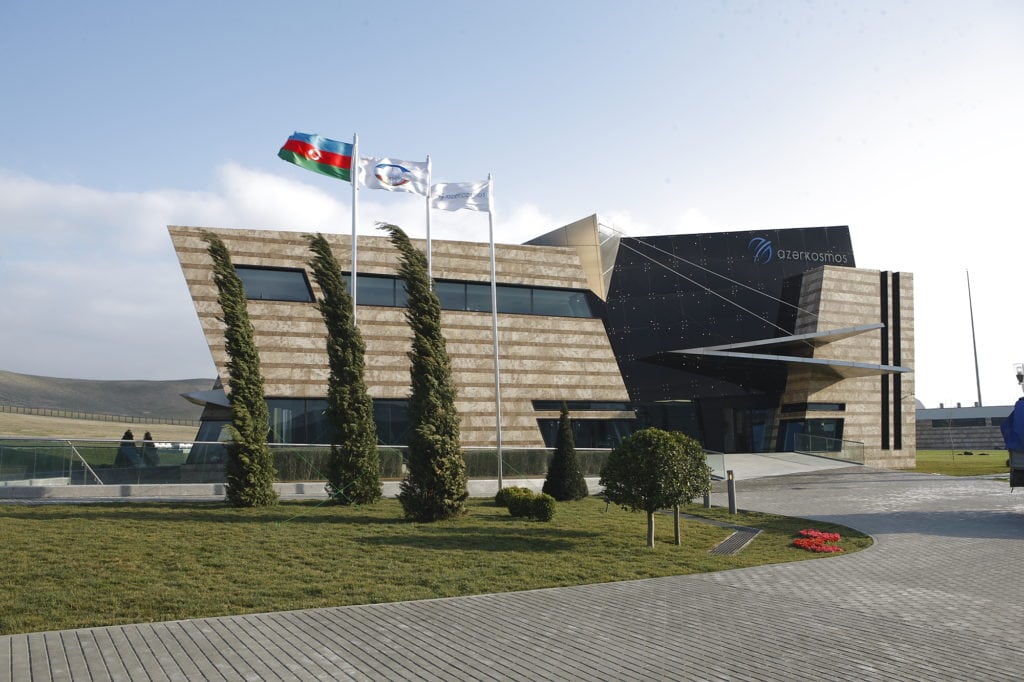 [Via Satellite 04-28-2016] Azercosmos is a rapidly evolving satellite operator, having not only brought significant business to its first telecommunications satellite, Azerspace 1, but also having teamed with Airbus Defence and Space to create an imaging capacity of 6 million square kilometers a day. Started as a vision of Azerbaijan president Ilham Aliyev, the company plays a key role in diversifying the country’s economy away from oil-based revenues.

Last year Azercosmos became the exclusive provider of television channels in Azerbaijan. The company also started commercial operations of Azersky/Spot 6 with Airbus, which joins Spot 7— a satellite Azercosmos has been operating since 2014. Azercosmos is continuing to scale up its capabilities in both telecoms and Earth Observation (EO), with new infrastructure under development for both.

Azerspace 1, the company’s first satellite, launched February 2013 to 46 degrees east longitude with 24 C-band transponders and 12 in Ku-band. The satellite provides coverage over Europe, Africa, the Middle East, the Caucasus, and Central Asia. A second telecom satellite, the Azerspace 2/Intelsat 38 condo-sat, is currently under construction with SSL.

Rashad Nabiyev, chairman and CEO of Azercosmos, told Via Satellite that the majority of Azerspace 1 is now commercialized across a customer base that spans more than 16 countries, including Turkey, Russia, Georgia, the UAE, Germany, the U.K., Ukraine, and others.

“Technological progress is not only increasing the competition and generating shifts in consumption patterns, but also creating additional demand for satellite services,” said Nabiyev. “I am optimistic about opportunities for increased satellite usage in the Central Asian region, and also in the maritime and mobility sectors that cut across many regions. We now have HDTV channels on Azerspace 1, and in 2016 we plan to add more local TV channels not only from Azerbaijan but also from other Central Asian countries.”

Owning satellites has turned Azercosmos into a prominent member of Central Asia’s satellite industry. It has also enabled Azerbaijan to become more self-reliant. As a country without contiguous borders, satellite has helped connect geographically separated regions.

“Azerspace 1 enabled direct telecommunication links with Nakhchivan Autonomous Republic, a landlocked enclave of Azerbaijan, where, before, communication was only possible through infrastructure belonging to other countries. Azerspace 1 provides mission-critical operations that are now a favorable solution from a national security standpoint,” said Nabiyev.

Azerspace 2 is due to enter service toward the end of 2017. The satellite is to continue building on the momentum of Azerspace 1, supporting Direct-to-Home (DTH) television, government, and network services. Azercosmos struck up a unique partnership with global satellite operator Intelsat for the spacecraft. Intelsat’s half of the spacecraft, Intelsat 38, will replace Intelsat 12, continuing the operator’s business with DTH platforms in Europe, and the Asia-Pacific, along with Internet access in Africa. Located only one degree away from Azerspace 1, Nabiyev described the partnership as creating many opportunities.

“The new satellite will be placed at the orbital position of 45 degrees east longitude, a position leased from Intelsat, which also acts like a lessee of satellite resources,” he explained. “The coverage area for Azerspace 2 was also a decision factor as it includes Azerbaijan, many European countries, Southeast Asia, the Middle East, and Africa.”

Nabiyev also hinted that Azercosmos could pursue other joint satellite opportunities in the future.

“The telecommunications satellite market is now a very active market segment, and once Azerspace 2 is operational and generating revenue, Azercosmos is prepared to evaluate other mutually beneficial strategic partnerships,” he said.

Azercosmos is somewhat less interested in High Throughput Satellites (HTS), Nabiyev said, because of their limited advantage over traditional satellites when serving video and DTH customers. Though acknowledging their ability to serve the rising demand for data, Nabiyev said it does not make sense to fill lots of spot beams with the same video channels. He added, however that Azercosmos does not exclude the possibility of a partnership to own and operate an HTS satellite one day, possibly through partners.

“Traditional satellites have increased the number of video channels, and Azerspace 1 is no different than this,” he explained. “We consider video to be our number one vertical market. As for the new business, we see complete solutions for mobility and government market segments a good 2016 opportunity, closely followed by corporate networks.”

On the EO side, Nabiyev said Azercosmos is fulfilling needs for up-to-date imagery over Azerbaijan. The operator is already cooperating with Azerbaijan’s Ministry of Emergency Situations, State Aerogeodesy Company, State Committee on Property Issues, Ministry of Agriculture, Ministry of Ecology, State Oil Company, Azerbaijan National Academy of Sciences, and Aviation Academy to use satellite imagery. Nabiyev said Azercosmos is heavily invested in educating stakeholders within Azerbaijan on how to leverage the imagery, which has applications in defense, emergency response, agriculture, environmental protection, science, urban planning, among others.

“In 2016 our goals also include delivery of new value-added products to Central Asia, enabling the agriculture industry to take better decisions. For forestry, water management and monitoring, new image acquisitions and associated value added products will improve efficiencies to levels seen in more mature markets such as Western Europe,” he added.

The company is currently constructing new ground segment infrastructure in Baku, Azerbaijan to access images acquired from Airbus Defence and Space’s Pléiades 1A and 1B satellites, which help create 0.5-meter resolution optical imagery products.  Nabiyev said Azerspace 2 is also driving new projects to upgrade and advance the company’s ground infrastructure. International partnerships on the ground segment side will be important as well, he added. Azercosmos is pursuing partnerships to enable full monitoring across networks, and with Azersky, plans to start operating its own digital remote station and archive storage for customers.