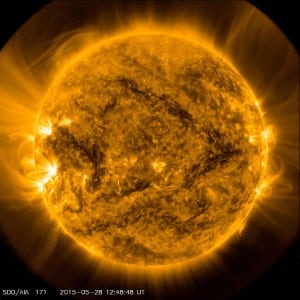 [Via Satellite 04-05-2016] The U.S. National Oceanographic and Atmospheric Administration (NOAA) is seeing growing demand for its Space Weather Prediction Center (SWPC) that provides free space weather products and services. The agency’s National SWPC Physicist Terrance Onsager said April 4 the agency spends roughly $10 million per year on SWPC and likely more if the cost of assorted instruments on satellites like the Geostationary Operational Environmental Satellite (GOES) and Deep Space Climate Observatory (DSCOVR) are included. Onsager said the SWPC’s role is to provide forecast warnings and alerts necessary to provide resilience against space weather — variations in the space environment between the sun and Earth. Space weather, specifically, describes the phenomena that impacts systems and technologies in orbit and on Earth.

Space weather affects a number of critical capabilities including Position, Navigation and Timing (PNT); communications; electrical power grids; and aviation. Global Navigation Satellite Systems (GNSS) such as the United States Global Positioning System (GPS) are affected by adverse space weather when solar eruptions disturb the near-Earth plasma layer, the ionosphere, and later the signal characteristics of the wave passing through. Satellites are also impacted due to both the heightened radiation exposure at higher altitudes and by increased drag in Low Earth Orbit (LEO).

Electrical power grids experience the penetration of unwanted induced currents during strong geomagnetic storms. Commercial airlines cannot fly over poles during solar radiation and/or geomagnetic storms. Communication may be blacked out and some impacts to navigation accuracy may occur. NOAA estimates direct costs for reroutes to accommodate bad space weather can be more than $100,000 per flight.

Onsager said predicting and analyzing space weather is important because almost everything in space is somehow interconnected.

“Not only does space weather affect the accuracy and availability of our satellite based navigation systems, but space weather also impacts the satellite systems that we have put in place to try to mitigate it,” Onsager told an audience at the State Department in Washington.

Onsager said NOAA in 2005 initiated a subscription service for SWPC where customers, both government and industry, can select products of interest. These include a simple three-day forecast of space weather that includes a brief description of why conditions have occurred or are forecast. A more detailed forecast discussion is also available. Other products, available via email, include predicted sunspot numbers and radio flux, solar cycle progression, an Air Force magnetometer analysis report, U.S. total electron content models and real-time solar wind observations.

The SWPC has grown to nearly 48,000 customers for space weather products and services since opening in 2005. Onsager said nearly 25 percent of SWPC customers come from outside the U.S.

Onsager said even though the SWPC products are developed in-house, NOAA does make an effort to partner with industry as much as possible. He said NOAA has had a number of Small Business Innovative Research (SBIR) opportunities and has one coming up to specifically look at the impact of space weather on satellites.