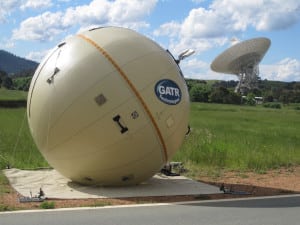 The HBSI-PT configuration is a dual-band antenna system with Ku- and X-band capability, plus a colorless transport networking stack comprised of a colorless core and three enclave networking group. This USMC HBSI-PT configuration consists of five cases (antenna, modem/power, Ku-band, X-band, networking group) weighing less than 370 lbs. per terminal. According to GATR, the HBSI-PT has the same performance as a 4,000-lb. mobile terminal but packages far below the size of other compact terminals. The Marine Corps contract, valued at more than $11 million, is the first independent Department of Defense (DOD) Program of Record for GATR’s commercial technology, earning a type designator of AN/TSC-212.