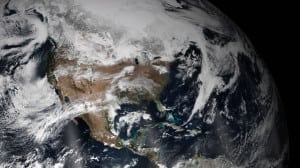 [Via Satellite 02-03-2015] The National Ocean and Atmospheric Administration’s (NOAA) Joint Polar Satellite System (JPSS) is in danger of encountering near-term coverage gaps as early as this year, according to a new report distributed by the Government Accountability Office (GAO). This gap in weather-predicting data threatens to heavily impact the government’s ability to provide critical environmental information used in measuring climate and forecasting weather, including severe storms and hurricanes.

NOAA, in collaboration with NASA, started the JPSS program in 2010 as a response to the U.S. government’s decision to disband its cost-gouging and problem-plagued National Polar-orbiting Operational Environmental Satellite System (NPOESS), the next-generation satellite system in place to monitor the Earth’s weather, atmosphere, oceans, land and near-space environment. The announcement to end the program came following years of delays and downsizing. While the NPOESS — now known as the Suomi National Polar-orbiting Partnership (S-NPP) — is currently in orbit to bridge the gap between the old program and full implementation of the three-satellite JPSS constellation, the new system has also been plagued with cost-ballooning set backs. GAO now estimates that the new system may not be launched in time to prevent a multi-year rift in weather forecasting and coverage.

“Recent cost growth on key components is likely unsustainable and risks remain that could increase the potential for near-term satellite gaps,” the report states, noting that this is no small issue. “Because of the criticality of satellite data to weather forecasting, the likelihood of a significant satellite data gap, and the potential impact of a gap on the health and safety of the U.S. population and economy, GAO added this issue to its High Risk List in 2013.”

GAO’s High Risk List is published every two years and hopes to draw attention to programs and problems that should be addressed immediately. With lives potentially at risk, the agency feels NOAA needs to step up its game in mitigating the gaps that, due to degrading coverage, could occur as early as this year and last as long as 53 months.

As each polar-orbiting satellite views the entire Earth’s surface twice a day, the system provides global coverage of conditions that affect the weather and climate. The data collected is highly important for both civilian and military weather information and provides graphical weather images and specialized weather products. Most importantly, however, the data is a primary tool in forecasting extreme weather days in advance, including the path and intensity of hurricanes, storm surges and floods, the reports states.

“The National Weather Service performed case studies to demonstrate how its forecasts would have been affected if there were no polar satellite data in the afternoon orbit, and noted that its forecasts for the ‘Snowmaggedon’ winter storm that hit the Mid-Atlantic coast in February 2010 would have predicted a less intense storm further east, with about half of the precipitation at three, four and five days before the event,” the report notes, continuing on to say that the models would have under-predicted the amount of snow by at least 10 inches, leaving emergency teams underprepared. Similarly, without polar satellite data, weather models would have inaccurately placed 2012’s Hurricane Sandy at sea, far from the New Jersey coast where it made landfall and was deemed one of the most destructive hurricanes in U.S. history. With the looming gap in data threatening to last between one and four years, GAO sees lives, property and the nation’s infrastructure at risk.

As of now, NOAA is developing the program on schedule and within cost constraints, with a baseline budget of $11.3 billion for the program through fiscal year 2025. The first satellite was successfully launched in 2011 and the launch dates for the next, JPSS 1, is expected no later than March 2017. The last satellite in the three-piece constellation, JPSS 2, is slated to launch in December 2021. But as the effectiveness of the current constellation degrades at rates faster than anticipated and certain setbacks point to a possible delay in the launch of JPSS 1, GAO is calling on NOAA to focus more heavily on ways to mitigate the impending gap.

The report notes that there are nearly 40 alternatives for preventing or minimizing the impact of these gaps. “These alternatives include actions to prevent or limit a potential gap by providing JPSS-like capabilities, and actions that could reduce the impact of a potential gap by (a) extending and expanding the use of current data sources, (b) enhancing modeling and data assimilation, (c) developing new data sources, or (d) exploring opportunities with foreign and domestic partners,” the report states. The problem, however, is that obstacles such as the time necessary to develop new instruments may prevent many of these alternatives from being able to address a near-term gap.

With Congress urging NOAA to play nice with the commercial sector in order to help close impending weather gaps, companies such as Spire, GeoOptics , and GeoMetWatch, among others are looking to step in to cover shortfalls in the JPSS launch timeline.

Meanwhile, as current polar satellites continue to age in orbit and JPSS 1 looks to get further from launch, the potential for a gap nears and the GAO is urging the NOAA to beef up its contingency plans, which it sees as incomplete, inconsistent and generally ill-prepared for potential problems.

“Until NOAA addresses shortfalls in contingency activities before data gaps can occur in near-term, and improves its progress monitoring, the agency will have less assurance that it is adequately prepared to deal with a gap in polar satellite coverage,” the agency states.