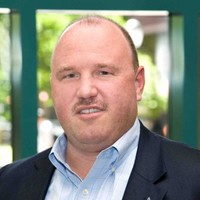 Northrop Grumman on Thursday said it has appointed Tom Wilson as president of its Space Systems segment effective Jan. 1, 2022, succeeding Blake Larson, who is retiring next February.

Wilson is currently vice president and general manager of the Strategic Space Systems division within the Space Systems segment, the fastest growing of Northrop Grumman’s businesses. He has spent most of his career in the space systems arena.

The Space Systems segment generated $8.7 billion in sales in 2020 and the company is forecasting about $10.5 billion in revenue for the business in 2021. The segment manages programs such as the Air Force Ground Based Strategic Deterrent, the Missile Defense Agency’s Next-Generation Interceptor program still in competition, the Air Force Next-Generation Overhead Persistent Infrared (OPIR) missile warning satellite program, NASA’s Artemis human spaceflight program, and hypersonic weapons efforts.

Before joining ATK, Wilson spent more than six years at Swales Aerospace, which was acquired by ATK in 2007, serving as vice president and general manager for national security.

According to his LinkedIn profile, Wilson made the jump to the private sector in 2001 after more than 12 years in the U.S. Department of Defense, first as an engineer and program manager with the Naval Research Laboratory, then as special assistant in the Office of the Secretary of Defense, and finally as deputy staff director for the Rumsfeld Space Commission.

The commission was chaired by Donald Rumsfeld, who served as Defense Secretary for Presidents Gerald Ford and George W. Bush, and was charged with assessing the management and organization of the U.S. national security space enterprise.

“Tom’s leadership experience and achievements in the national security, civil and commercial space markets make him ideally suited for his new role,” Kathy Warden, Northrop Grumman’s chairman, president and CEO, said in a statement. “I am confident our space business will continue to grow and perform under Tom’s strong leadership, vision and values.”

Until his retirement, Larson will continue as corporate vice president and report to Warden to help with the leadership transition.