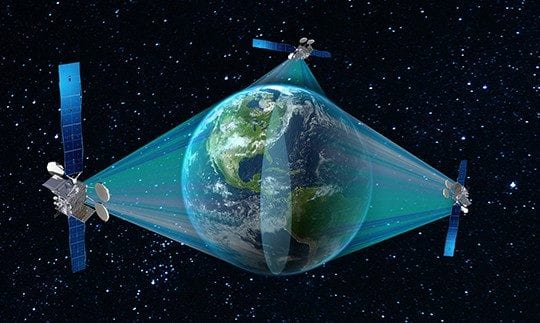 Viasat has pushed back the launch of its first ViaSat-3 satellite, and does not expect to launch the satellite until early 2022. CEO Rick Baldridge said during the company’s Third Quarter (Q3) 2021 financial report call on Thursday that work on the program has been hindered by a wave of COVID-19 cases in Arizona. Viasat is preparing to deliver the first satellite payload to Boeing, which will begin the final phase of the countdown to launch readiness.

“We continue to make really good progress on the program and we’re moving closer to delivery of the first payload. The record COVID spikes seen in the quarter, especially in Arizona where our payload facilities are located … haven’t worked in our favor. They’ve caused some intermittent work delays both internally and with our supply chain in the recent quarter,” Baldridge said.

ViaSat-3 is a constellation of three ultra-high-capacity satellites that will deliver broadband service to residential, aviation and government transport users. In the previous quarter, Viasat had targeted a late 2021 launch. Baldridge also said it will take several months after the satellite is launched for it to be in full service, because it is a “very complicated overall system” that must go through thorough testing.

Viasat had a busy Q3 in terms of new deals, and the operator highlighted its agreement to acquire RigNet, and the remainder of the wholesale broadband joint venture in Europe, the addition of SKY Brasil as a broadband distribution partner, and the In-Flight Connectivity (IFC) deal with Delta Air Lines.

Government Systems, Viasat’s segment with the most revenue, reported $265 million in Q3 revenue, a 9% decrease from Q3 2020. Viasat expects “transient effects associated with the change in administration” to affect the Government Systems segment in the very near-term. Backlog at the end of the quarter is over $1 billion, a 12% increase Year-over-Year (YOY).

Satellite Services and Commercial Networks saw modest revenue increases. Satellite Service revenue in Q3 was $221 million, up 4% over Q3 2020. Viasat reported 596,000 subscribers, down from 603,000 at the end of the prior quarter. The company attributed the subscriber decline due to bandwidth supply constraints, sustained demand for premium service plans, and network planning to accommodate increases in passengers and planes in service.

Commercial Networks saw $90 million in revenue, 6% growth over the same period in 2020. Awards in the quarter for this segment grew 75% YoY to $235 million with the first terminal orders under the Delta Air Lines win, and a large next-generation antenna program.