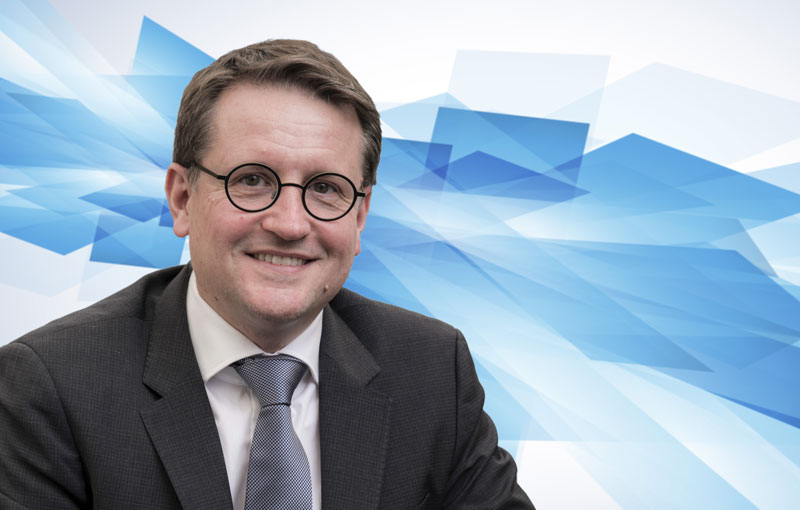 Eutelsat CEO Rodolphe Belmer, who leads one of the world’s largest global satellite operator businesses, says he expects meaningful consolidation among satellite communications companies to happen soon — and that this ‘inevitable’ event will help operators gain the size they need to properly support the future needs of telco customers.

Via Satellite spoke with Eutelsat CEO Rodolphe Belmer recently for the September edition about the operator’s plans in the video market, and why Eutelsat continues to see video as a key vertical. In Eutelsat’s most recent full year financial results, video made up 61% of the operator’s revenues, but as Eutelsat makes investments in satellite broadband, data, and mobility services, Belmer predicts that connectivity will represent the same amount of revenue for the company in the medium to long-term.

“Transformation doesn’t mean we want to cut one of our legs, we want to continue to preserve that business as long as we can. We think that for the foreseeable future, video will be there and will be much more than instrumental to enable us to develop ourselves in the new verticals,” Belmer said.

In a wide-ranging interview, Belmer talks about the upcoming start of KONNECT service, Low-Earth Orbit (LEO) constellations, and a future in Internet of Things (IoT) connectivity.

VIA SATELLITE: Do you think Eutelsat will see more effects of the pandemic in the coming fiscal year, than the fiscal year that just ended?

VIA SATELLITE: Could you see any circumstances where Eutelsat could acquire SES’s video business, or there would be a merger of the two businesses?

Belmer: Our video size is less than SES video, SES is much more exposed to video than we are. But I think the telecommunication satellite industry will need to consolidate to address effectively the world of connectivity of tomorrow. We need to gain in size to finance global infrastructure to connect effectively with telco networks everywhere in the world. We need to gain in size to be able to support infrastructure, space segments, but also the ground equipment to connect with the terrestrial telcos and the commercial force to sell that.

This will probably be one of the key points of the next few years for industry. Consolidation is inevitable and has been needed for a while. It’s not only for financial reasons [for an] industry marked by overcapacity in certain verticals. That of course can create synergy, but more importantly, to address effectively the world of connectivity and this very big potential which is at stake. We need to consolidate to compete effectively with newcomers backed by governments in large countries.

Belmer: We need to gain in size — each of us is too small. I can’t comment on who specifically should consolidate. All I can say is that consolidation is absolutely needed for the future of our industry.

VIA SATELLITE: Can you explain your recent move to acquire BigBlu Broadband’s satellite business?

Belmer: In the financial terms it is relatively minor, we disclosed the acquisition price [38 million euros/$44.8 million] which is meaningful but not really material. For us, given our size, given all financial capabilities, it’s important strategically because it gives us a distribution arm to distribute and commercialize our broadband-to-consumer product across the entire European continent. We needed to complement our commercial strategy with a retail arm to make sure we are able to effectively distribute the capacity we produce. Part of our strategy is the wholesale strategy, where we’ve been able to sign large deals of distribution, notably with Orange in Europe. But we lacked the direct-to-consumer branch to complement that wholesale strategy.

We hesitated for a while, between doing that by ourselves or acquiring our best, most important distributor, which was BigBlu. Acquiring BigBlu came out as the best possible solution because they have a presence almost everywhere in Europe with quite capable networks of distribution in many different countries. And they’re also a very skilled and capable and competent workforce, with highly talented managers. In that kind of business, people make the difference and that’s one of the reasons why we finally decided on the point instead of developing those capabilities

VIA SATELLITE: Are you planning to start KONNECT service this year in 2020, or the upcoming fiscal year for Eutelsat?

Belmer: The start of the service depends upon the commercial start date of the satellite itself. We launched a satellite for internet for Europe in January and it’s finalizing its orbit-raising and its preliminary in-orbit testing right while we are speaking. The satellite is expected to enter in commercial service capacity from October to the beginning of 2021. Why? Because we have been sort of hampered in our technical equipment rollout by COVID.

VIA SATELLITE: What speed will the service offer?

Belmer: Speed will be able to reach 100 megabits per second per terminal. That’s not typically what we intend to sell in Europe. Probably we will sell data plans which are around 30 megabits per second, which is enough to comply with the needs for high speed internet [for] most European countries and for most people across Europe. We target pricing around 30 euros per month for that kind of service.

VIA SATELLITE: Do you have any updates on Eutelsat’s Internet of Things Non-Geostationary (NGSO) broadband strategy? Last year, Eutelsat made an announcement planning for a constellation of nanosatellites. Is COVID impacting what you plan to do there in the next two to three years?

Belmer: We still intend to launch our first nanosatellites to prove our concept during the course of this year. We are three to four months late on our deployment roadmap for that new service, but we continue to see Internet of Things as one of the big growth potentials for our industry in the future. We think that in the immediate future growth engine will be connectivity, high speed internet for people needing it in the digital divide, or on planes, or in mobility situations. After that, the new source of growth will be Internet of Things.

VIA SATELLITE: As one of the CEOs of the biggest companies in this industry, were you surprised with what happened with OneWeb and LeoSat? Did you always believe that these companies were going to struggle?

Belmer: I can’t say that we were surprised. We have always said plainly that the economics of those initiatives would be very challenging. That’s exactly what happened. And that’s the difficulty where we are at the moment, we all feel that LEO constellations will probably be the infrastructure of choice in the future to provide a universal connectivity. At this time, the economics remain highly, highly challenging. We’re not there yet.

VIA SATELLITE: How long do you think it will take for LEO constellations to be a viable connectivity option?

Belmer: Difficult to say, probably half a dozen years. It depends a lot on the behavior of the large institutions and how strongly institutions decide to back the initial phase of those kinds of initiatives. If institutions like the governments decided to back massively the emergence of those infrastructures, it will completely change the pace and the rate at which you can launch this kind of project. If you intend to finance those projects only from a commercial standpoint with value creation point of view, the time needed to find a reasonable economic equation would probably be four to six years.

I’m not saying that by accident, because increasingly, there is a lot of large institutional interest for this kind of solution. Notably in the U.K. with the U.K. government backing OneWeb. It’s also evident in the U.S. with the U.S. government backing very strongly SpaceX. The EU Commissioner for Internal affairs [Thierry Breton] has made no mystery of his interest in this kind of technology. It’s completely changed discussions.

Editor’s note: An earlier version of this article misstated the speed of KONNECT service.