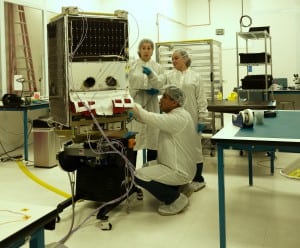 [Via Satellite 04-06-2016] Earth observation company Terra Bella, previously known as Skybox Imaging, wants to have 21 satellites in orbit by the end of next year. The Google company has two satellites in orbit today: SkySat A, which launched on a Dnepr in 2013, and SkySat B, which orbited on a Soyuz in 2014. The next 19 mark the start of the SkySat C series, of which 11 are assigned to respective launch providers. In order to meet its goal of fielding a fleet of 21 by 2017, Terra Bella is studying launch options for the last eight.

Space Systems Loral (SSL) is Terra Bella’s manufacturing partner for the SkySat satellites, building 19 SkySat Cs — one prototype and 18 final versions. Joe Rothenberg, director of Skybox engineering and operations at Google, told Via Satellite that the first SkySat C satellite is currently scheduled to launch aboard a Polar Satellite Launch Vehicle (PSLV) from the Indian Space Research Organization (ISRO) on May 31. The PSLV launch is for the prototype to precede the rest of the series. The next four are then to launch on an Arianespace Vega as a rideshare this summer, followed by six more on Orbital ATK’s Minotaur rocket during the fourth quarter this year.

“Obviously, given it’s a satellite program, if we have problems on either the construction side or launch vehicle delays it could slip a little bit, but right now things are on track,” said Rothenberg.

Of the three biggest factors — cost, schedule and reliability — schedule is Terra Bella’s most important criterion right now, according to Rothenberg. He said there are enough reliable launch vehicles for the SkySats, which weigh about 120 kilograms each.

“[What is important is] having the schedule flexibility to do what needs to be done, to make sure what you are putting in orbit is going to work; in the case of a demonstration satellite, that you haven’t shortchanged the amount of technology you want to test just to make the launch date. It’s flexibility of schedule to accommodate potential development problems on the ground, or even manufacturing and test of a production line. Schedule flexibility is probably the most important, and cost being a very close second,” he said.

Rothenberg said Terra Bella would like to have dedicated launch vehicles for spacecraft like the SkySats, but that it remains to be seen if any will come to fruition. The company’s only dedicated launch is Orbital ATK’s Minotaur. The previous Dnepr and Soyuz missions, along with upcoming PSLV and Vega missions are all rideshares.

“The problem is there is a hole in the satellite launch industry that Virgin Galactic, among others, is trying to fill, and that is to be able to put a 100 to 200 kilogram satellite on a small dedicated rocket. There isn’t a rocket at this point that is developed and flying that is capable of just handling one satellite and giving you total control of schedule where you are the primary payload,” he explained.

Terra Bella, prior to acquisition by Google, signed an agreement with Virgin Galactic, which Rothenberg said was more likely a letter of intent: Terra Bella is interested in using Virgin Galactic launch services when available. The launch services provider is developing LauncherOne, a dedicated small satellite launch system capable of delivering 200kg into a standard Sun-Synchronous Orbit (SSO), or more than 400kg of payload to other orbits. Rothenberg said he remains circumspect of all upcoming SmallSat launch systems until they have performed a test flight, and that Terra Bella has other strategies that don’t depend on new entrants to mitigate launch schedule risk. Still, he said not having dedicated SmallSat rockets, particularly for prototype satellites, inhibits the SmallSat industry at large.

Once its constellation is complete, Terra Bella is aiming for a revisit rate of roughly three times a day for most of the planet. Rothenberg said some places will have four visits, while higher altitudes will see less frequency. Each satellite will be capable of sub-meter resolution.

The biggest difference between the SkySat C series and its predecessors is the addition of a propulsion module. ECAPS is providing a green propellant system for the satellites. Rothenberg said the propulsion-enabled satellites will support lifespans of at least 10 years. Without propulsion, he said the earlier satellites should yield six to 10 years of useful life before orbit decay makes using them more complicated. He said there are few life-limiting parts on the spacecraft other than the reaction wheels, and that onboard systems are fully redundant, so the satellites could last significantly longer. With the resources available at Google, Terra Bella may be able to offset the impact of orbit decay through software.

“The computing power nowadays at the rate it is growing — and because we are integrated into the compute resources of Google — we should be able to compensate for the effect of orbit decay on images well beyond the 10 years in software. So even after the propulsion expires, they will still have useful life,” said Rothenberg.

Rothenberg said Terra Bella is also working on its next series of satellites, known as SkySat D. He declined to provide additional details on what these spacecraft will be capable of. Rothenberg said Terra Bella has customers and a number of paid application pilots going in several industries, including energy, insurance and seaport management. He said the company is also building out its ground system to handle the large quantities of data produced by SkySat satellites, and may here also be able to leverage new scale as part of Google.

“We built and currently are operating from our own ground station. We have partnered with KSAT to help us grow our ground stations. We are putting some of our own in, and off in the future where it makes sense, potentially tapping into Google data centers around the world,” he said.