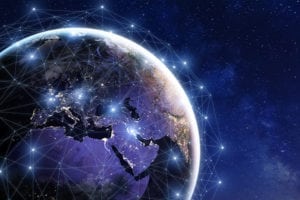 The service uses multipath technology which the company demonstrated earlier this year. The technology is Hughes’ ActiveComms Ecosystem, which routes individual packets depending on their requirements, through either the LTE network for applications requiring low latency, or through a GEO satellite for those requiring high throughput.

The company said Tuesday that HughesNet Fusion offers 25 Mbps download speeds with no hard data limits. The service is currently available today to HughesNet customers in select regions and with plans for more markets across the U.S. later this year.

“With HughesNet Fusion plans, we are solving the latency challenge inherent with GEO technology, while maximizing the many advantages of these time-tested satellites, including low cost, reliability, dense capacity, and widespread availability,” said Pradman Kaul, president of Hughes. “We are rapidly entering an era in which hybrid connectivity—both multi-transport and multi-orbit — will be commonplace.”

Hughes previewed the service earlier this year as part of how the company is responding to competition — including from SpaceX’s Starlink constellation. Kaul said in the operator’s August financial update that the company is losing some subscribers to competition and the Fusion offering is positioned to reduce churn from users who require faster latency.