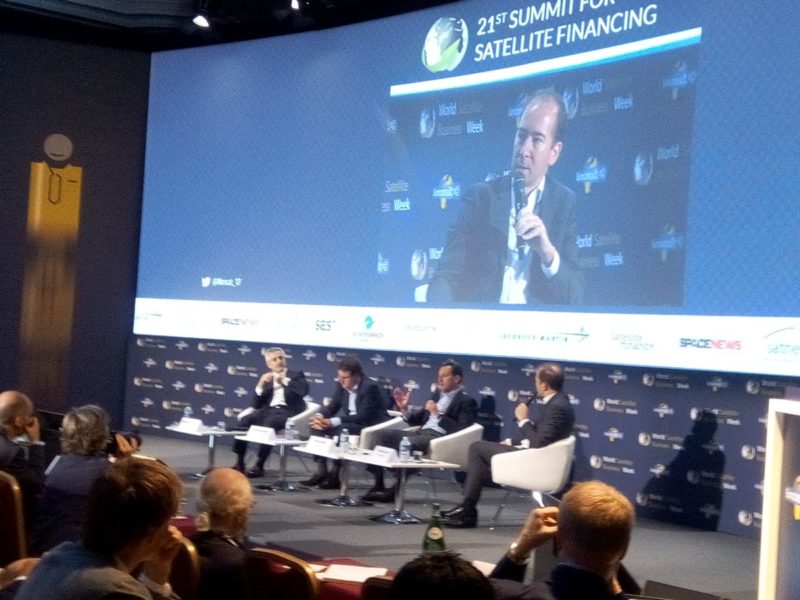 Rodolphe Belmer, CEO of Eutelsat, spoke enthusiastically about the video market, saying it has proved to be “very stable and growing.” He added that even though Over-the-Top (OTT) content is coming, the impact on the satellite industry has not been strong, and he expects IPTV and satellite will dominate the video market. “We also see increasing demand for capacity based on video,” he said. Belmer also said that broadband has emerged as a key growth driver for Eutelsat’s business, and that he expects that growth to be there for “a very long time.”

Belmer was also bullish on mobility markets, saying that Eutelsat expects revenues from mobility services to double over the next four years. He said the name of the game for Eutelsat is to bring some differentiation so it can have more pricing power. “We are going to invest where we can have this factor,” he said.

However, he also sounded out a warning to the industry. Although he said he wouldn’t describe the industry as irrational, Belmer said it has bought tons of new capacity to market, which has led to a vicious cycle in terms of price.

Belmer also said he doesn’t see backhaul as much of an opportunity for the company. “We don’t want to be a mobile backhauling company. We believe the demand on that is tomfoolery. Telcos always end up fibering places. We believe it is our business is to go where telcos don’t go,” he said.

Dan Goldberg, CEO of Telesat, gave an update on Telesat’s plans and how he sees the industry going forward. The company is getting ready to launch its first Low Earth Orbit (LEO) prototype satellite later this year in November. Telesat is developing a LEO constellation in Ka-band, but there will be delay in the launch of the second prototype satellite, which will likely push into next year.

Goldberg is bullish about the prospects for Telesat in broadband. “The demand for broadband services is growing dramatically. Our challenge is bringing forward these architectures that can satisfy this demand. There has been a big uptake in supply. I feel pretty good for the next few years for Telesat. We want to be able to offer differentiated solutions. Demand is growing significantly in the mobility market. Our customers in both maritime and aero are looking to add still significant amounts of capacity,” he said.

Goldberg said that for the satellite industry have a much more vital role in global broadband, it will need to make its capacity more capable and much more like the experience that is delivered by the terrestrial network. “There are greenshoots coming up. We need more progress on the user terminal to be successful in broadband,” he said.

While he was bullish about the prospects in the global broadband market, he admitted that the operator had seen headwinds in Latin America, as well in the energy market, but that stability was slowly coming back to these markets.

SES probably made the most talked-about announcement at the show, as it revealed it is launching a new service, O3b mPower, and also ordered a number of new satellites. SES CEO Karim Michel Sabbagh said the operator wanted to move from a “monolithic approach” to a more flexible approach when looking to attack new markets. He said the industry is a transitional era, and is moving from a fixed era to a more dynamic one. He described it as the “Exabyte” era.