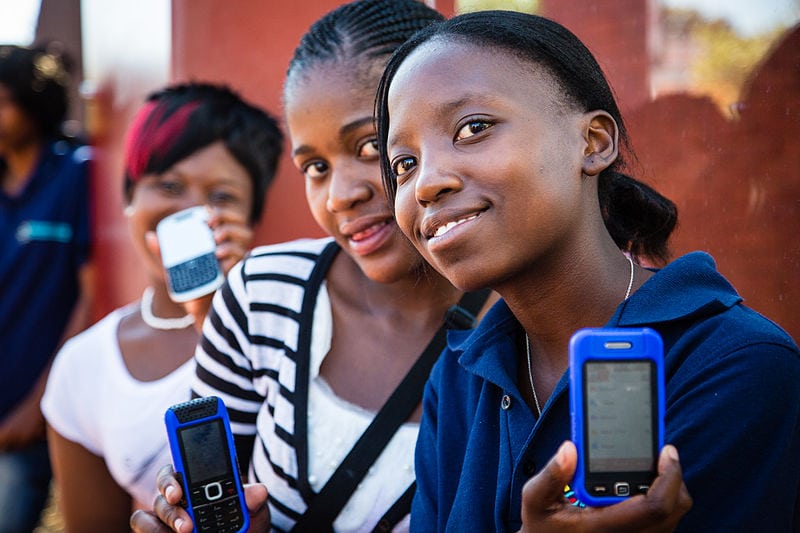 Students in Africa show off their mobile phones. Photo: Wikimedia.

IntelsatOne Mobile Reach Solar 2G is a turnkey package designed for Mobile Network Operators (MNOs) seeking to expand voice services to remote populations throughout sub-Saharan Africa. The solution includes all satellite, cellular and power components, allowing MNOs to deploy and connect with their subscribers virtually anywhere, according to Intelsat.

While some countries and regions are transitioning to 4G and even looking at 5G, 2G still represents a large amount of existing wireless infrastructure. In Africa, more than 672 million people rely on 2G services, and according to Intelsat, those networks need to be upgraded and expanded to meet growing connectivity demands throughout the continent. Further, fully half of the continent is unconnected, resulting in a need to provide a connectivity solution to regions not served by current mobile network service territories. IntelsatOne Mobile Reach Solar 2G was developed specifically for MNOs to be able to extend their coverage to serve these populations, according to the company.

“Now that smaller, more portable kits can be used with our high power Intelsat Epic platform, connecting those communities will become easier and more cost-effective. The experience of implementing High Throughput Satellites (HTS) into our customers’ networks has affirmed our beliefs about its potential,” said Jean-Philippe Gillet, Intelsat vice president and general manager of broadband.