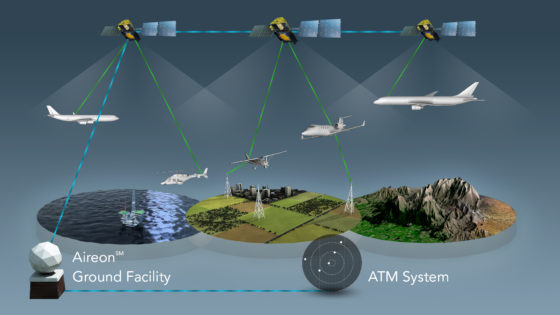 A total of 2,462 ADS-B messages were received and decoded, providing comparable data to that of terrestrial ADS-B stations. According to the FAA, the flight test was highly choreographed and precisely located and timed within the Washington and New York Flight Information Regions (FIRs) to help provide validation of the capabilities of the Aireon system.

Made possible by the FAA’s NextGen program, the coordinated flight test involved trials of 125-watt top and bottom-mounted antennas on the FAA’s N47. The FAA retrofitted the aircraft with calibrated antennas, flight-data test equipment, and recorders. Based out of the FAA William J. Hughes Technical Center in Atlantic City, New Jersey, the N47 aircraft helped begin the evaluation and verification of the performance of the Aireon system, particularly in high interference and high-density environments. Aireon’s space-based ADS-B global surveillance and aircraft tracking technology is largely a combination of FAA NextGen advancements, and the Iridium Next satellite constellation, which hosts the Aireon ADS-B receivers.

Aireon’s space-based ADS-B system will be operational in 2018, shortly after completion of the Iridium Next satellite constellation. The service will provide Air Navigation Service Providers (ANSPs) with global air traffic surveillance and airlines with real-time flight tracking.