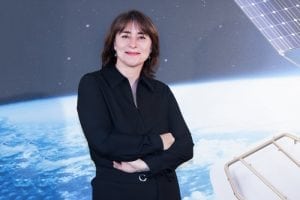 [Via Satellite 12-16-2016] Eutelsat Communications has appointed Sandrine Teran as group Chief Financial Officer (CFO) and member of the executive committee. She will join Eutelsat on Jan. 9, 2017.

Teran was formerly managing director of Louis Dreyfus Holding, based in the Netherlands, and has occupied other key executive positions in the Louis Dreyfus Group during the past eight years, notably global head of tax and corporate secretary, and subsequently global CFO of Louis Dreyfus Company. From 2000 to 2008 she was head of taxation, corporate finance and internal audit at Eutelsat, contributing to significant structural changes including the privatization in 2001 and the Initial Public Offering (IPO) in 2005. She began her career at Ipsen as risk manager in charge of tax and insurance before joining Euro Disney where she was head of tax.