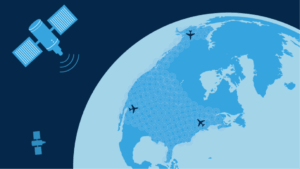 [Via Satellite 11-17-2016] Gogo has signed an agreement for services on the Intelsat 29e satellite. The In-Flight Connectivity (IFC) provider will use high-throughput services from the first satellite in the global Intelsat Epic network to deliver in-flight Wi-Fi to passenger airplanes operating in the heavily traveled North Atlantic route. The connectivity provided by Intelsat 29e, which began operations earlier this year, will deliver bridge services for Gogo until Intelsat 32e becomes operational in 2017. Intelsat is also providing Gogo with IntelsatOne managed services via its Mountainside, Maryland teleport.

Intelsat 33e will expand Gogo’s services across Europe, the Middle East and Asia when it begins service in the first quarter of 2017 at 60 degrees east. The Horizons 3e spacecraft will create a global HTS service for Gogo when it begins operations over the Asia-Pacific region in 2018, Intelsat said.