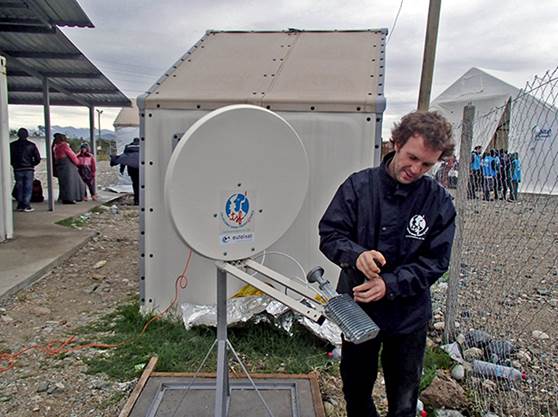 [Via Satellite 08-30-2016] Eutelsat and Telecoms Sans Frontieres (TSF), a Non-Governmental Organization (NGO) specializing in emergency telecommunications, have renewed their partnership agreement initiated in 2007. Based in Pau, France, with additional bases in Mexico and Thailand, TSF is dedicated to facilitating critical communications services in emergency situations when terrestrial networks are disenabled, and also to providing links in extremely remote areas. Within 24 hours of a crisis, TSF can be on the scene anywhere in the world to set up telecommunications centers and the IT equipment required for crisis units, with satellite at the core of the technologies deployed. Since its foundation in 1998, TSF has intervened in more than 70 countries, supporting the work of more than 800 humanitarian organizations.

Eutelsat has increased its support of TSF’s missions with the migration crisis in Europe and the Middle East. The operator helped set up a dozen satellite dishes in seven refugee centers in Greece, Serbia and Macedonia in order to meet increased need for connectivity by humanitarian organizations working in the field, including Save the Children, UNICEF, Medecins Sans Frontieres, and Oxfam. Satellite broadband terminals that are easily transported by air and set up on-site in just a few minutes have enabled more effective information-sharing between NGOs and improved cooperation with stakeholders further afield.