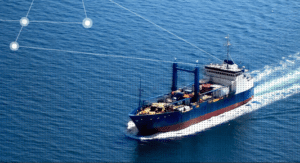 [Via Satellite 07-14-2016] Lower satellite capacity pricing is making way for broadband VSAT adoption in maritime and driving the move toward the connected vessel, opening the door to huge satellite opportunity in the market, a new report by analyst firm Northern Sky Research (NSR) finds. The report predicts there will be more than 240 transponders of Fixed Satellite Service (FSS) capacity and 46 Gbps of High Throughput Satellite (HTS) available by 2025, putting downward pressure on prices, particularly in maritime.

“I think it’s easy to make the case that more abundant capacity is leading to some of these new and novel things. But because there are pressures on the cost of capacity, service providers are having to look at other revenue streams,” Brad Grady, senior analyst with NSR, told Via Satellite. He noted that the cost-per-bit of capacity is being driven down both by the new abundance of satellite capacity coming online through Inmarsat’s Global Xpress broadband network, traditional FSS C- and Ku-band capacity that’s coming down the line, as well as pricing pressures from vessel owners and maritime companies themselves.

“There is a lot of pressure on pricing that’s coming out from end users who have a lower ability to pay because their economics and business-cases are getting pushed, and from the capacity that’s coming online,” said Grady.

With retail revenue growth annually exceeding 8 percent from 2015 to 2025 and HTS options nearing 30 percent, the report notes the market is trending toward higher connectivity for maritime customers. On top of this increased interest in connectivity, as a result of these satellite capacity pricing pressures, Grady said that satellite operators are stepping up to offer new services through tracking and big data analytics with the advent of Machine to Machine (M2M)/the Internet of Things (IoT) services.

“One class of services when you’re talking about M2M/IoT in the maritime space, is the vessel or cargo itself is directly connected to the satellite network. So it’s tracking a container, or tracking a container in a greater logistics chain,” Grady said. This includes monitoring refrigerated containers for temperature, monitoring the vessel for fuel, or other types of device management M2M services that are being deployed on the container itself. One example of this is M2M and IoT provider Orbcomm’s CargoWatch Secure solution, launched in February of this year, which monitors the condition of cargo shipments in real-time as well as visibility of dry and refrigerated cargo in transit and in storage.

“We’ve always talked about [device management M2M services]. People have always thought it would be a great application, but now it’s actually happening and the pace at which it is happening is beginning to pick up,” Grady said.

Grady also points to opportunities for satellite operators or service providers to provide M2M/IoT communications to track fishing vessels or provide vessel management services in the fishing sector. “That is another huge opportunity in terms of an equipment play, in terms of enabling fishing vessels that fall under this regulatory regime to monitor their catch, report their position, and everything else that is required of them from a communications standpoint,” Grady noted.

M2M services that monitor systems on the vessel could also be a window of opportunity for satellite operators to provide value-added services to vessel operators through data analytics.

“Maritime engine providers, such as Rolls-Royce, have an interest in maintaining that engine on the vessel itself, and within the whole fleet of engines they have deployed, to do reliability testing and other kinds of predictive analytics across their install base,” said Grady. “Those are not going to be direct satellite services — you’re not going to see Rolls-Royce putting up an antenna on a vessel — but usually the information will be backhauled through the communications infrastructure. That is an opportunity for satellite service providers to establish those relationships that are traditionally outside the norms that satellite operators would establish.”

Grady stressed that predicative maintenance, or monitoring systems and forward-deploying parts so vessel operators can reduce time in port, is currently the most direct way to monetize big data usage. There are further opportunities for satellite operators through big data analytics, however. In the offshore market, satellite could benefit from the big data sector by providing larger pipes, more bandwidth in more places, and integrating more types of connectivity options, as the market is seeing an increasing need for terrestrial wireless, and new opportunities are coming up through providing multiple-path redundancy.

The call for satellite bandwidth will remain high and increase going forward, led by the offshore sector, which over the next 10 years will increase need from “megabits per second to the multiple mega-bits per second,” according to Grady. But while demand for offshore and merchant vessel connectivity will increase, the amount that the operators will be able to pay will remain fairly flat, which means the service providers will have to figure out a way to deliver these increased services at a lower rate.

“Satellite operators are going to have to look at how they can design the networks to feed this kind of demand, which generally doesn’t have as high reliability or Service Level Agreement (SLA) requirement as offshore vessels or passenger cruise ships, but they still don’t have the demands for the throughput,” said Grady. “This is a service provider question, as to how they are going to provision those networks to remain at a price point that merchant vessels can get at.”