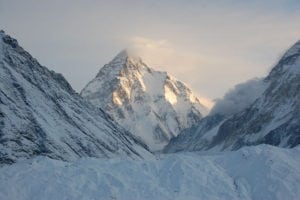 [Via Satellite 07-01-2016] The first telemedicine expedition to the mountain K2 is underway, after successful trials in the Himalayas in March. The WiCis-Sports app, running on Thuraya’s SatSleeve+, will monitor the #K2Adventure16 Madison Mountaineering trip.

The #K2Adventure16 project began June 12, and is set to reach the summit in mid-August. Garrett Madison is leading the team of 10, accompanied by porters from Pakistan and Sherpas from Nepal. One of the most remote places on Earth, with only 46 permits issued in 2016, K2 is the second highest and arguably the world’s most intimidating mountain.

Select adventurers will wear lightweight, breathable, Bluetooth-enabled garments featuring embedded or integrated sensors, under normal climbing gear. The sensors continuously monitor heart rate, oxygen saturation, skin temperature, geo-location, altitude, speed and bearing. Data will be streamed to the WiCis-Sports internet platform using Thuraya SatSleeve+, and will be available within one to two seconds on any internet-enabled device on the planet.

Leo Montejo, CEO of WiCis, will keep track of the party’s progress from California. WiCis-Sports is also combining and analyzing vital sign data to provide a snapshot of the climbers overall health status. Should a medical or other emergency arise, rescue teams will have immediate access to the data needed to assess the climbers’ condition and the exact location.

Mountain climbers underwent two successful trial expeditions earlier this year in the Himalayas. Montejo, a team leader in the first of the two, tested the Thuraya SatSleeve+ and WiCis-Sports App. Three expedition members were forced to withdraw through illness; one acute mountain sickness case was so serious that a rescue helicopter was called for, using Thuraya SatSleeve+.