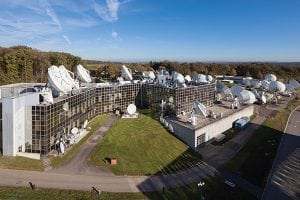 [Via Satellite 06-23-2016] Analysts have been in Luxembourg this week as SES held an Investor Day to explain various aspects of its growth strategy going forward. The reaction has been largely positive, although many are preaching caution and patience as SES looks to boost revenues and profits going forward. Sarah Simon, a satellite equity analyst at Berenberg said she felt the SES management did a good job explaining its strategy, but in a research note, she said that the reality is that, until organic growth returns to positive territory, the bear case around data will prevail. Patience — rewarded with a dividend yield of c7 percent — is required for a bit longer, she said.

Digging a little deeper, Simon talked in the research note about everything from the O3b acquisition, capital expenditure plans, as well as growth in key markets such as government and video.

“SES sees U.S. sequestration pressures easing, and expects budgets to increase in 2017. Contracts like the 12 transponders recently sold to the Kativik Government in Canada should help non-U.S. business in 2016. O3b is tendering for a new 300Mbps contract, and further tenders may follow. Meanwhile, in video, management expects further capacity demand increases as broadcasters scale up from SD to HD. Only 27 percent of SES European channels are in HD, versus 67 percent in the United States. SES 9 will boost video growth in H2: the satellite should be around 70 percent full within 18 months,” Simon said.

On the subject of O3b, Simon added, “Management explained its decision to take full control of O3b in 2016. P&L synergies of 106 million euros ($119.53 million) were outlined. Management was clear that full consolidation of O3b will permit strategic decisions that should allow SES to make better returns from O3b than if the move to 100 percent ownership had been delayed to the end of 2017 when the put option could have been exercised.”

Eric Beaudet, a satellite equity analyst at Natixis, was also present at the Investor Day, and also put out a research note. He was also cautious saying that while SES management mentioned that pressure will remain on the data and government segments in the short term, SES management was “not convincing” about the big concern of the day: the group’s capacity to increase usage enough to offset pricing pressure in the data segment resulting from the increasingly widespread use of HTS solutions. “In these circumstances, we do not see the stock rebounding in the near future and we reiterate our neutral rating, even though the stock’s valuation is looking attractive again,” he said.

Beaudet added that SES’s historical data revenues “are under considerable pricing pressure that is set to last, and this is one of the main reasons why SES has posted falling revenues for five quarters running.”

Simon also believes issues remain for SES in the enterprise segment. “SES’ strategy of selling turnkey solutions, as it does in video and government (where it has gained market share) makes sense, and SES’ exposure to point-to-point is low (2 percent of group revenues). However, it is unclear how much pressure new capacity will put on the segment. This being said, we see the revenue that is vulnerable as only 6 percent or so of group revenue, meaning that it should not create too much drag on the business overall in future,” she added.

Via Satellite recently did a big interview with Karim Michel Sabbagh, the CEO of SES, for the cover story for our June edition. When asked about the revenue mix, Sabbagh said video will continue to grow, and other segments will grow even faster as they are starting from a lower base. He highlighted mobility.

“If you exclude North America and the business jet market, there were probably less than 2,000 airplanes connected in 2015. However by the end of this decade, we expect to see a least 10,000 connected planes — that’s a 400 percent increase. Top that up with the exponential demand for aero connectivity, which could increase by 10-fold, and the ultimate aero growth could be anyone’s guess,” he said. “Industry analysts expect the Compound Annual Growth Rate (CAGR) growth in mobility (maritime, aeronautical) to be 30 percent by the end of the decade. If we grow at the same rate as the industry, then mobility would represent 10 percent of our revenues. Is this what we are modeling? No; we have much higher expectations than that because the aero industry is moving very fast. The experience airlines are looking to create for their passengers will require much more bandwidth.”

Sabbagh also highlighted the maritime and cruise industries and said revenues could evolve much faster than the company expect.

“Look at the growth in business opportunities O3b has enabled with Royal Caribbean: together they have created a highly-connected cruise experience that allows the cruise operator to appeal to a much younger clientele and open up a potential new market. Just one of their cruise ships uses more capacity for connectivity than all other ships together. So as you can see, there seems to be infinite possibilities ahead of us,” he said.