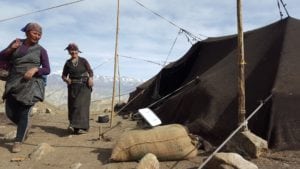 [Via Satellite 06-10-2016] Thuraya and WiCis Sports are pioneering the use of satellite communications for wearable devices by supporting a team on a climbing expedition in the Himalayas. Adventurists with Madison Mountaineering are currently in the middle of the six-month trip, using Thuraya’s IP+ terminal, SatSleeve+ and SatSleeve Hotspot to stay connected.

Wearables are anticipated to be a major market in the next few years, as devices like smart watches and fitness monitors achieve greater market adoption. These devices’ need for connectivity is also creating a new market for satellite. The Thuraya-supported mountaineers are using WiCis’ Adventure Sports Solution to track the heart rate, body temperature, oxygen saturation, location, altitude and speed of each climber. This data, along with the general ability to communicate, is changing the way mountaineering is done, and could lead to the use of satellite for wearables on a regular basis.

Goutham S.K, senior manager for products and solution development at Thuraya, told Via Satellite that the idea to support wearable devices by satellite surfaced through the introduction of a supporting Application Program Interface (API) for the SatSleeve. The API lets developers build applications for unconventional environments where only satellite communications would otherwise be available.

“The opportunity to partner with WiCis came in while we were searching for portable solutions that make it possible to create dynamic data feeds from remote locations. WiCis was looking to use small form factor products that would help stream data from remote locations; Thuraya was able to offer them exactly what they were looking for,” he said. “The synergies matched perfectly.”

For WiCis, satellite-enabled wearables are a new technology. President of WiCis Carlota Fenes said the company tested the devices with Thuraya connectivity for almost seven weeks, with extensive trialing in Upper Mustang and then Upper Dolpo. She said the company was very happy with the results and that the Madison Mountaineering team has made regular use of the devices.

“The adventurers were able to stream their location and vitals daily, so in America we always knew where they were and if they were safe. The Spotcast weather forecasting feature was used also daily and proved very useful in predicting bad weather twice. Chat is also possible from anywhere,” she told Via Satellite.

“Vital sign measurement is more useful than we ever imagined, so this means that the blind approach that the market has now needs education,” she added.

Thuraya’s primary market is connecting people and devices in remote locations, which gave the company the experience to pursue this project. Raouf Khalife, director of marketing, communications and branding, told Via Satellite that Thuraya has worked on numerous other “extreme” adventure projects ranging from mountain climbing and Alpine racing to solar car racing in the Australian outback and desert expeditions.

“If we stay with the mountain theme to begin with, professional traveller Aleksey Yakovlev has used Thuraya equipment for more than a year now. His many trips include a ski mountain expedition in eastern Siberia. Then there’s Daniele Nardi, a human rights ambassador who supports solidarity projects in Nepal and Pakistan. When he set out on his winter expedition at Nanga Parbat in the Himalayas in December, he did so with a Thuraya IP and antenna and the support of Intermatica,” he said.

“We are in discussions with ultra runners and other ultra athletes. We will be beginning to make the solution available to the marketplace in about a month. We are also in contact with coaches and companies such as Hypoxico which prepare the athlete for their endeavor in an optimal way,” she said.

“Using wearables will definitely allow for users to have a safer climb since we can measure parameters that can predict AMS (Acute Mountain Sickness),” added WiCis CEO Leo Montejo “We are measuring heart rate, oxygen saturation and body temperature. The wearables are easy to use and do not interfere with the trekker or climber … I think that within five years these will be standard.”

Fenes said WiCis’ system is designed to connect with any wearable/Internet of Things (IoT) device. As more wearables and IoT devices come along, the more data will need integration. This is, she said, will provide an opportunity for WiCis to gather all this information and make it available in real time, anywhere.

Thuraya also sees this as a major opportunity.

“What we are seeing today are early adopters using these solutions, because the global wearables market is still in its early stages. Having said that, the wearables market today is already worth more than $1.15 billion. The potential opportunity is considerable, though, since that figure is expected to surge to more than $25 to 30 billion, according to various estimates. This will certainly have a positive impact on the demand for satellite wearables,” said Marwan Joudeh, product manager for Machine-to-Machine (M2M) and Product Lifecycle Management (PLM) at Thuraya.

S.K. added that Thuraya has four other projects for third party app development underway that could lead to more unique use cases for Thuraya products. Joudeh expects not only adventurers will make use of satellite wearables, but also enterprises seeking to enhance the safety and improve the efficiency of their remote workers. He said Thuraya is confident that growing numbers of businesses in the oil and gas, mining, utilities and government sectors will deploy wearable technology for their remote workers.

“Wherever it is important to raise safety standards and enhance efficiency, our technology can add real value,” he said.