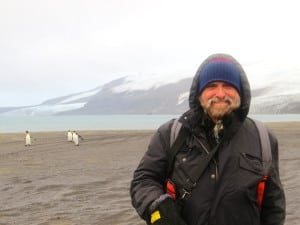 Expedition Organizer and Leader Robert Schmieder KK6EK on Heard Island. Behind him are a large bay and glaciers, lying in view from the VKØEK campsite. Photo: Cordell Expeditions

[Via Satellite 06-07-2016] Cordell Expeditions has completed the 2016 Heard Island Project, a multidisciplinary expedition to a remote island in the Southern Ocean, with satellite connectivity from Inmarsat Government. The purpose of the three-week expedition is to provide new information about Heard Island’s harsh volcanic environment and to validate satellite communications in severe, and extremely isolated, environments in the Antarctic.

Inmarsat’s BGAN service played a key role in the expedition’s radio science (Medium Frequency (MF) and Higher Frequency (HF) propagation experiments) as they contacted more than 75,000 other stations during unusual solar geomagnetic conditions. It also enabled communications with the science teams when they travelled to a number of areas remote from the base camp to gather samples and conduct high-resolution photography.

The Heard Island Project’s goal is to bring technology to challenges of worldwide need and interest. Other areas of focus included: searching for unknown species that may have been revealed by recent major glacial retreat; confirming the group’s recent discovery of subterranean rivers carrying glacial meltwater; documenting plastic debris from sources worldwide; and collecting samples of the environment that are expected to contain cryptobiota — organisms that have the ability to suspend metabolism for years or decades in the face of extreme conditions of cold, heat, desiccation or toxic chemicals.

The results from this expedition will help scientists better understand the effects of climate change in polar regions and the ability of models to predict the consequences of actions or inactions in facing this challenge.