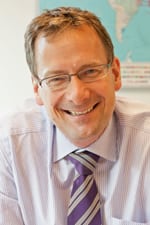 [Via Satellite 01-12-2016] 2015 was a busy year for O3b Networks as the company announced a number of deals in its first year of commercial operation. It also ended the year by announcing that had closed $460 million in incremental financing to support its continued growth. The company will use the funds from this financing round to expand the total number of satellites in O3b’s constellation from 12 to 20. Via Satellite caught up with O3b CEO Steve Collar to assess what is next for one of the most talked about companies in satellite.

VIA SATELLITE: Can you give us an update on where the O3b business is and your goals for the second year of commercial business?

Collar: It has been a fantastically successful and encouraging first year of operation at O3b. We spent quite a lot of time building up to our full commercial launch and this year became the fastest growing satellite operator in history. We are seeing demand across all geographies, all products and probably most importantly, we see customers that we put up on the satellites buying substantial amounts more in a very short period of time. This really proves the value proposition that we have spoken about all this time, which is about performance. Delivering meaningfully better performance makes a huge difference to our customers’ networks and helps them grow.

VIA SATELLITE: I was at Global MilSatCom late last year, and it was interesting to see what O3b’s play was with the U.S. government. When do you expect to make a breakthrough here?

Collar: We already have some business with the government, which is frankly earlier than I expected. I think in terms of becoming an important part of the governments’ communications strategies, we are looking toward 2016-2017 with great optimism. We have taken the things that our commercial customers find compelling in the maritime space and the backhaul space, and moved them into a government environment. Government customers have a number of the same challenges as our commercial customers so it is no surprise that there is strong interest.

VIA SATELLITE: The perception is that the U.S. government is slow to change when procuring capacity. Are you finding that here?

Collar: I wouldn’t say so and, in some cases, we actually see the government being ready to move more quickly than the commercial world. The energy market or the Mobile Network Operators (MNOs) are both quite conservative and don’t always move super quickly. In our experience, with government, the moment you are able to persuade them that the value you bring is genuinely unique, compelling and helps solve their problem, things move quickly.

We have done that largely through demonstrations. We have set government end users up on our system and said “try it.” We have been able to demonstrate immediate distribution of high-resolution imagery and video, maps, weather data and other information. Users are excited with real-time voice, video and shared desktop conferencing capabilities as well as tactical 4G/LTE wireless backhaul. None of this is possible over traditional satellite solutions. Of course you have to go through the procurement cycle and figure out how new capabilities can be funded and that can take time, but from an adoption of technology standpoint, we have found them to be pretty responsive.

VIA SATELLITE: Which vertical do you think provides most opportunity for the company over the next 12 months?

Collar: In terms of growth opportunities I have said for some time that 2014 was the year of maritime, 2015 was energy and I expect 2016 will be the year for government and I still think that is right. In 2014, we successfully deployed our services with Royal Caribbean and we have seen that relationship just continue to build to the extent that Royal Caribbean thinks of O3b connectivity as they plan their new vessels. It is a huge complement to O3b and a relationship that we will never take for granted.

In 2015, I talked about energy and this year, despite the downturn in the industry, we have seen some significant traction with the large majors onshore. We have just signed our first offshore deal, which we are tremendously excited about and should be in service offshore in the next couple of months.

2016 is the year when I expect us to become deployed in a serious way with government. That will be both in a mobile maritime environment and also in terms of some of the priorities that government has in terrestrial backhaul.

VIA SATELLITE: When we say government, are we talking more from a U.S. perspective or international?

Collar: It is broader than just the U.S. government. The U.S. government is the biggest user of commercial satellite capacity but we are seeing demand come from a number of different governments. The applications vary also; border security is of particular concern for governments worldwide. Providing real-time multiple feeds of HD video from sensors across a long boarder is interesting in that context. Governments need increased situational awareness and this drives data growth and the need for backhaul to central locations. Having the ability to flexibly bring back large amounts of data from remote locations securely is really important. We feel we can bring some pretty impressive capability in the government space.

VIA SATELLITE: 2015 was the year of SmallSat’s and a number of interesting announcements (SpaceX, OneWeb). Do you see these impacting O3b in any way?

Collar: It’s really encouraging to see the innovation in our industry and I am a big fan of the potential performance that these new constellations could offer. From an impact standpoint, I think it is too early to draw too many conclusions. Drawing a comparison with O3b, I think these new constellations are where we were in 2008-2009. We have lived through the challenges of developing a business from the initial round of funding right the way to launch and becoming fully operational and I would say that all of the LEO systems that I have seen look a couple of orders or magnitude more complex than O3b. I think one thing that is clear though is that the theme of ongoing disruption of the traditional satellite business model is one that will continue.

VIA SATELLITE: Where are you in the procurement cycle for building new satellites?

Collar: We have announced the procurement of an additional set of satellites. Excitingly, we are also looking at what is beyond, building off our perfected spectrum and our established orbital arc. We are looking to really leverage this exceptional platform that we have built and scale the company quickly. It’s a big priority for us and you can expect us to add meaningfully to our capability, while still leveraging the fundamentals — which are low latency, high performance and affordability.

VIA SATELLITE: What percentage of capacity on your satellites has O3b actually sold?

Collar: We have somewhere between 40 and 50 percent of our capacity committed on our initial fleet, hence the reason for heading into a new procurement. We have a fantastically scalable constellation. We can comfortably grow to more than 100 satellites before we need to worry about our orbit becoming crowded. The trick for us is to keep up with demand that we are seeing in the marketplace. We want to make sure we have a continuous supply of capacity for our customers.