KT Sat Still Interested in Being a Global Satellite Operator 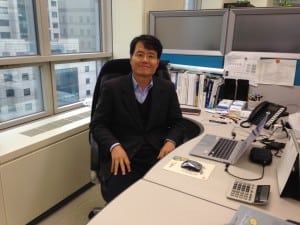 [Via Satellite 12-29-2015] South Korean satellite operator KT Sat, owned by Korea Telecom, has not given up ambitions to become a global presence in the satellite industry. The operator currently fields three satellites — Koreasat 5 at 113 degrees east, Koreasat 6 at 116 degrees east, and Koreasat 8 at 75 degrees east — and has two more under construction. The year 2016 marks the beginning of a notable expansion for the company as new satellites bring KT Sat to previously untapped markets.

KT Sat’s challenge today is providing satellite services in a highly connected domestic market, which is no easy feat. Furthermore, the Asia-Pacific market is experiencing a swell of new capacity from emerging and established operators. However, KT Sat has earned its stripes finding ways to provide meaningful satellite services in areas where lots of telecommunications infrastructure already exists. The company has invested in Ultra-HD, Maritime-VSAT (MVSAT) and hybrid satellite-cellular technology to generate new business. In an interview with Via Satellite, Sang Jin Yang, VP of KT Sat’s Satellite Service Business Unit, explains the company’s go-forward strategy for 2016 and beyond.

Via Satellite: How has business been for KT Sat this year?

Yang: It has not been an easy year, but I would say it has been a meaningful year as we have discovered a great potential in our future business.

As you know, the Korean satellite market is said to be saturated, and for that reason we have been striving to find a new business model by focusing more on new demands in Ultra-HD, maritime and aviation services in domestic markets. Also, to go forward to be a global operator, we have been trying to identify new key customers in Indonesia, Philippine, the U.S. and any other regions.

And, this year, we have made a significant achievement in maritime service area. Recently, we have signed a MVSAT service contract with one of the largest shipping companies in Korea: H-line shipping. This was the first major contract for the Korean shipping companies to deploy MVSAT services. Thirty five vessels will now be able to enjoy our MVSAT services as a result of this contract. We also have developed various innovative maritime solutions like satellite-LTE, remote health care, and IoT based tracking.

Via Satellite: KT Sat has two more satellites, Koreasat 7 and Koreasat 5A under construction. What new markets do you hope to reach with these spacecraft?
Yang: We hope to reach new markets in South and South East Asia. With the two new satellites, we will have new capacity to serve Indochina (Thailand, Vietnam, Myanmar, Laos, Cambodia and Malaysia), India, Bangladesh and Pakistan and additional capacity for the existing Indonesian, Philippine, and Japanese markets. The satellites also have a special purpose beam for maritime services and Ka-band applications.

Via Satellite: Do you have other satellites planned for the future?

Yang: As already mentioned, we will launch two more satellites, Koreasat 7 and 5A in 2016 and 2017 respectively. Once these two new satellites are successfully deployed, we plan to seek further expansion by participating in condo-satellite opportunities.

Via Satellite: A few years ago, KT Sat talked about becoming a global satellite operator. Is this still part of your plan?
Yang: Yes, certainly. Although I believe we are already in that track, the launch of Koreasat 7 and 5A satellites will be a cornerstone for achieving this goal.

Via Satellite: What ground segment advancements or investments is KT Sat currently pursuing?
Yang: KT Sat already has an excellent ground facility, Kumsan teleport, which has 35 antennas pointing to most satellites in Indian and Asia-Pacific region. It has the best Internet and data backbone using our parent company KT’s infrastructure. Even more, this teleport is equipped with well-trained and experienced operators. We are providing the best quality data, video, maritime, and Inmarsat services to our customers. Intelsat uses our teleport for their data and maritime services. However, we will continuous expand our antenna and ground facility to cope with providing more teleport services to other operators and our own services.

Regarding the satellite control station ground segment, we are currently developing our own satellite control system for Koreasat 7 and 5A with the Korean Electronics and Telecommunications Research Institute (ETRI). Also, we will install new communications monitoring systems in each country covered by our future satellites so that our customers can enjoy high quality 24/7 global Network Operating Center (NOC) services.

However, I believe we could overcome this difficulty in the market just like we have done in Korea. As you know, Korea is a well-wired nation, which is a serious handicap for satellite operators. We plan to overcome the issue of oversupply in that region by proposing total solutions to our potential customers based on our extensive expertise and experiences in Korea and elsewhere.

Via Satellite: South Korea is a frontrunner in the 4K Ultra-HD market. Is the development of 4K Ultra-HD living up to your expectations?

Yang: Just a few days ago, KT Skylife, the only DTH operator in Korea and KT Sat’s largest customer, announced that subscribers of Ultra-HD services has exceeded 100,000 within just six months since its service launch in June, 2015.

Also, KT, the largest IPTV service provider, is known to have more than 400,000 Ultra-HD subscribers with just three Ultra-HD channels. Imagine how many more will subscribe to Ultra-HD services when more Ultra-HD content is added by terrestrial broadcasting companies such as KBS, MBC, and SBS and any other content supplier in Korea.

It goes without saying that the growing demands for Ultra-HD service will require more satellite capacity. So, to cope with this Ultra-HD service demand, we are adding six more broadcasting transponders onto our Koreasat 7 satellite.

Via Satellite: South Korea is also a frontrunner in areas like 5G and the Internet of Things (IoT). Do these hold opportunity for KT Sat?
Yang: Yes, we strongly believe that 5G and IoT provides a great opportunity for our future satellite business. Currently, ‘4G-LTE Satellite Based Solutions’, co-developed by KT Sat and KT, are quite popular in MVSAT installed vessels and disaster recovery driven by the government. Also, KT Sat is now jointly developing an IoT platform with KT to provide a world-wide container tracking solution.

Via Satellite: How are IPTV and OTT services influencing your business? Are they a help or hindrance to satellite?

Yang: It is very hard to say whether they are a help or a hindrance.

Having more than 10 million subscribers and occupying around 40 percent of the pay-TV market in Korea, it is fair to say that the IPTV is a threat to the satellite DTH service.

However, on the other hand, if you think about the popular hybrid service, which is a real-time service through satellite, Video on Demand (VOD) by Internet, it can also be said that the IPTV or OTT opens a new business opportunity to satellite operators like us. Two million out of 4.3 million subscribers of KT Skylife are subscribing to this hybrid service.

Via Satellite: What are your goals for KT Sat in 2016?

Yang: Next year will be a critical turning point of our business. We are targeting 5 percent growth in revenue next year. To do so, we plan to drive our business further by focusing on expanding our global business market and the maritime service. We are very motivated to make pre-launch service contracts with our potential customers in wherever region our fleets could cover and we plan to carry out an aggressive marketing campaign for our MVSAT services.