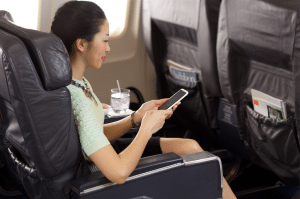 The new modem can deliver speeds of up to 200 Mbps of throughput, roughly 10 to 14 times what the previous generation modem could provide, and will enable throughput and flexibility for evolving technologies, such as streaming video.

“The new modem can provide enough streaming power to satisfy a plane full of people. Narrow body planes have less than 200 people. Widebody would have more than 600. For a widebody you may have to put two of these modems where in today’s technology you have to put 10 to achieve the same amount of throughput,” said Chatterjee.

The jump in technology and higher speeds can be attributed to breakthroughs in manufacturing the computer technology for the modem.

“Hughes new System on a Chip (SoC) has enormously increased processing power over the prior-generation modems, thus allowing integrated support for a number of highly customized and specific functions. The Hughes SoC enables a host of coding advances that equate to more bits per Hz, along with much higher packet processing capability. The added power and capability of the SoC also enables implementation of a number of advanced aero operation features supporting the complex beam switching required by spot beam satellites and data handling capabilities that contribute to a significant enhancement of the overall user experience,” explained Hughes’ Executive Vice President Paul Gaske.

The core focus of the HT modem is the ability to better leverage HTS systems. GEE has been readily shifting toward HTS, having procured capacity of this kind on several SES satellites. Chatterjee said HTS spacecraft connected with the HT modem will be able to provide large quantities of capacity to aircraft, giving airlines options as to how they want to use their satellite resources.

“The modem enables you to utilize what a high throughput satellite system is capable of providing,” he said.

The modem is also designed to provide more seamless switchovers between spot beams, which are inherently greater in number than their widebeam counterparts.

“Today, much more often than not, we make the switchover once or twice during a flight from the East Coast to the West Coast and passengers don’t notice. But when you go to a spot beam type of environment from east to west, with our high throughput systems you will go through six spot beams. So, now, you have to do this six times instead of twice. Maybe that one or two second flickering is okay for one time during a four-hour flight, it certainly won’t look very good if you do it six times,” said Chatterjee.

GEE has a major mechanically steered antenna project underway with Quantenelektronische Systeme GmbH (QEST) called the Global Ku Antenna capable of tapping into Ku-band satellites around the world. The HT modem will be compatible with this antenna, though Gaske added that the modem will not be limited by this model or frequency.

“Given our focus on global service capability, and the fact that different regions of the world are, and will continue to be, served with different types of satellites (both frequency band and transponder design), it has been a central focus to ensure that Hughes’ aero system is compatible with all of the various Ka- and Ku-satellites that will inevitably be used to deliver service around the globe,” he said.

Hughes has invested significantly in its own fleet of Ka-band satellites — something Gaske expects will lead to benefits in the aero market.

The HT modem does not require any new avionics equipment. Chatterjee said GEE is equipping its ground infrastructure with new technology and hardware in teleports in parallel with modem development so that the entire system will be ready when aircraft can access the new modem.

“By the time this modem is available for production and ready to go to an aircraft, we will have established the ground infrastructure that comes with the new technology,” he said.

The modem is currently in development and will enter production in the third quarter of 2016.