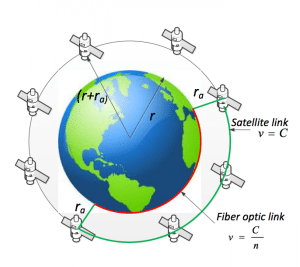 [Via Satellite 08-18-2015] Samsung may be joining the wave of companies betting on Low-Earth Orbit (LEO) satellites to provide global Internet connectivity. Farooq Khan, president of Samsung Research America, has published a paper titled “Mobile Internet from the Heavens.” In it, he details a proposal to provide “space Internet” to the entire world population using 4,600 low-cost, micro-satellites.

Khan sets an ambitious goal of providing “Zetabyte/month capacity which is equivalent to 200GB/month” to 5 billion users worldwide. Each satellite would provide “Terabit/s data rates with signal latencies better than or equal to ground-based systems,” the paper reads.

If Samsung were to pursue this plan, the corporation would join SpaceX, Google, Virgin, and a number of other companies looking to provide global and Internet connectivity using LEO satellites, thus bypassing the infrastructure hurdles of providing terrestrial connectivity in remote locations. Samsung, however, hasn’t made an official announcement as of yet.