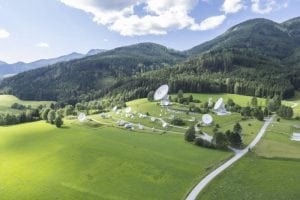 [Via Satellite 02-10-2015] Communications provider Telekom Austria Group (TAG) is extending its relationship with Eutelsat Communications to offer satellite broadband across its footprint in Central and Eastern Europe. This is an extension of the September 2013 agreement whereby the two companies partnered to host TAG’s white label Direct-to-Home (DTH) platform on the Eutelsat 16A satellite to broadcast television services to the same region

The new addition of Eutelsat’s satellite broadband service also equips Telekom Austria Group to offer broadband, voice calls and television services, via the Eutelsat 16A satellite, to any home in the region.

Communicating directly with Eutelsat’s KA-SAT satellite, the service requires a small satellite dish and modem and operates without the need for a fixed telephone line. The new satellite broadband service is immediately available in Austria and will be rolling out in more territories in early 2015.