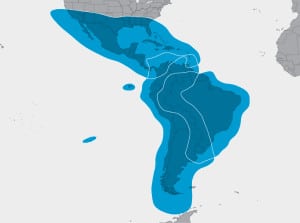 [Via Satellite 01-30-2015] The digitization of the oil and gas (O&G) sector is spurring on demand for new satellite capacity to keep pace with data needs. Dave Sikorski, sales director of North American enterprise and mobility at SES, names three reason for the increase in demand: crew welfare, monitoring regulations and production efficiency.

O&G companies are increasingly using new technology to monitor remote assets as a way to keep seasoned rig experts at a central office where they can assist with multiple sites, rather than one at a time. Compliance with regulations for reporting is driving the need for more data coming from rigs, and mobile apps are also seeing increased use. The diversity of applications for telecommunications services has made these companies more amenable to satellites services, Sikorski told Via Satellite.

“We’ve seen a change in attitude from the oil companies themselves from communications being a necessary evil to becoming a strategic asset,” he said.

As a result of this increased demand and more favorable disposition, SES is taking O&G companies’ satellite needs into consideration for future spacecraft, not unlike what the operator is doing for In-Flight Connectivity (IFC). Sikorski said SES 10, a satellite scheduled to launch aboard a SpaceX Falcon 9 in the second half of 2016 will have a strong emphasis on offshore O&G exploration. Under construction by Airbus Defence and Space to replace the AMC 3 and AMC 4 satellites, SES 10 will have three beams focused on different parts of Latin America. This satellite will help SES keep pace with the unique demand stemming from this sector.

“[O&G customers] certainly need more symmetrical bandwidth as opposed to one-way broadcasts,” said Sikorski. “They are definitely doing two-way communications. We are seeing an increase in that. They are used to a tiny 256 to 512 Kbps — now they are going through multi-megabyte duplex services. Plus you have the network systems. They are utilizing iDirect technology and Comtech modem technology that is becoming more efficient. We are working with all of those guys.”

“[O&G] is a more established market than In-Flight Connectivity, which is in its emerging phase, but has been growing faster than maritime communications, which is more established,” Claude Rousseau, research director at NSR told Via Satellite. “At the same time, it shares common aspects of the maritime market with offshore platforms, Offshore Service Vessels (OSVs) and tankers being a part of it. Because of new exploration and production of shale gas as well as pipelines, the numbers have been growing on the in-services unit side. As for capacity, more bandwidth rather than less has been the key characteristics of O&G sites.”

Rousseau cautioned, however that terrestrial options continue to grow as well. O&G companies typically have no special allegiance to satellite, so staying competitive against alternative sources is necessary to hold market share.

“Terrestrial connectivity continues to expand its footprint not only onshore but also near-shore and could become a threat to satellite as longer-term coverage enlarges and reaches out to more offshore platforms and land-based rigs,” said Rousseau.

Sikorski admitted that satellite is not always a favorite within the O&G sector, but said that its value is consistently upheld even when terrestrial options become available. The ubiquitous nature of satellite makes it a necessary failsafe even when not being used for primary communications.

“In general that’s true, but a lot of times they are operating in a remote area where there is no terrestrial communications. There is no fiber, no cellphone towers. Certainly the terrestrial communications players are in a rush to provide that as well, but I think the oil companies, as much as they would maybe not prefer to have satellite, they realize the benefit of it. And even when they get these terrestrial services in, they’ll keep the satellite as a redundant backup to the terrestrial. These places are still remote and things can still happen,” said Sikorski.