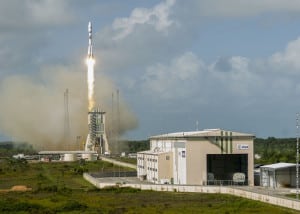 [Via Satellite 12-192014] In its 11th launch of the year, Arianespace successfully took four more satellites in the O3b Networks constellation to orbit. Using the Soyuz rocket from the Guiana Space Center, the flight follows the successful launches of the first eight O3b satellites in two batches in June 2013 and July 2014.

The launch marks the resumption of Soyuz launches from the Guiana Space Center, four months after an orbital injection anomaly occurred on the previous Soyuz mission. The European independent Inquiry Board named by Arianespace and the Russian Inquiry Board named by Russian space agency Roscosmos, submitted converging conclusions concerning the cause of this anomaly. Both boards issued a series of recommendations, which, according to Arianespace, were implemented.