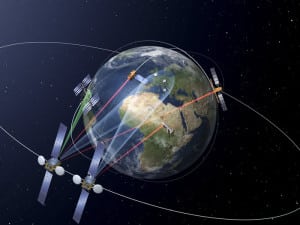 [Via Satellite 12-01-2014] Airbus Defence and Space and the European Space Agency (ESA) have completed a test linking the Thales Alenia Space-built Sentinel 1A satellite with the Airbus-built Alphasat satellite using Laser Communication Terminals (LCTs). The data transfer between Sentinel 1A, orbiting at 700 km in Low Earth Orbit (LEO), and Alphasat at 36,000km in Geostationary Earth Orbit (GEO) reached 0.6 Gbps out of a possible 1.8 Gbps over 45,000 km.

The laser communications system is part of ESA’s Space Data Highway. The test, which beamed images from Sentinel 1A to Alphasat and back to the ground, follows successful LCT operation between two LEO satellites since 2008. The Airbus Defence and Space subsidiary Tesat-Spacecom developed the terminal with support from the German Aerospace Center (DLR) and funding by the German Ministry of Economics.

The Space Data Highway will be used for the Copernicus Earth observation project, for more efficient transfer of large near-real-time data. According to Airbus Defence and Space, the remaining bandwidth will be commercially available for a variety of applications such as maritime border control, beyond line of sight control for Unmanned Aerial Systems (UAS), and for controlling and re-configuring satellites in orbit. ESA’s Director of Telecommunications and Integrated Applications Magali Vaissiere said the link could grow from 1.8 Gbps to 7.2 Gbps in the future.