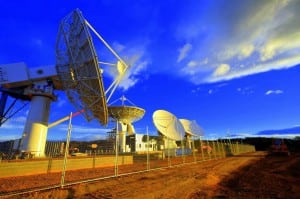 [Via Satellite 09-17-2014] Australia’s government-owned National Broadband Network (NBN Co) has completed its ninth satellite ground station, located in Waroona in Western Australia. The organization has one more station to finish in order to complete the network, which is to consist of 10 sites featuring 24 satellite dishes. The ground stations support NBN’s Long Term Satellite Service, scheduled to launch toward the beginning of 2016 or earlier.

Each site will have two 13.5-meter satellite dishes, with the Walumla and Kalgoorlie sites each supporting an extra two dishes for back up telemetry and tracking. Solar farms supplement most of the ground stations, providing clean power generation.

“When fully operational, each NBN satellite ground station will be capable of transmitting 10 gigabits per second, which is equivalent to downloading one HD movie every second,” said Matt Dawson NBN program director for satellite.