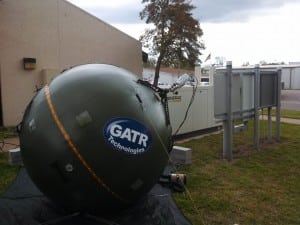 [Via Satellite 06-09-2014] On April 27, 2014 an EF2 tornado etched an eight-mile path of destruction across the center of Baxter Springs, Kan. The widespread damage severed fiber and cable lines and knocked out power, creating an urban dead zone in a time of great need. GATR Technologies, based in Huntsville, Al., was called upon by Disaster Tech Labs to deploy emergency satellite communications in the storm’s wake. Roy Priest, VP of sales and support, told Via Satellite the story of his company’s involvement in the relief effort that immediately ensued.

“We in Alabama have been affected in the past by severe tornado outbreaks, so we are pretty attuned to the damage that they can do, and several times we have had an opportunity to deploy very transportable emergency communications equipment in the aftermath of these kinds of events,” said Priest. “We had all been watching the weather the weekend before the tornado hit.”

Tornado-strength thunderstorm systems often move south, carrying the threat of severe weather down from the Midwest. Priest said the company actively follows a number of different emergency communications forums where response officials and members of the industry coordinate relief efforts. It didn’t take long for GATR to receive a call.

“We put out a notice on Monday that we had a couple of kits that would be available if there was a need, and on Tuesday morning we had a request. [Disaster Tech Labs] indicated that Baxter Springs, Kan. was an area that needed support and communications. It was not an area where there had been large numbers of fatalities … but their communications infrastructure was damaged and they needed some help,” said Priest.

Disaster Tech Labs sent six personnel to Baxter Springs immediately following the tornado strike. The initial assessment team arrived on April 28, and the tech team two days later on April 30. In addition to downing communications and power, the storm obliterated 75 homes and damaged hundreds of buildings. Priest made way to Tulsa on April 29 with a 1.8 meter Ku-band inflatable antenna. The lightweight design allowed him to fly with the GATR ball on a commercial airline. 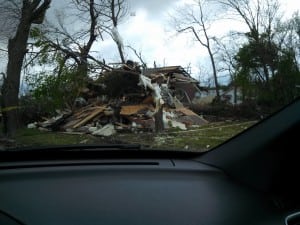 “Normally an antenna like that would weigh at least 500 lbs. and package in oversize transit cases that ship by large trucks,” explained Priest. “The kit that I took in was two cases that weighed a total of under 200 lbs. That’s the antenna, the feed, the modem, cables and some basic networking equipment.”

The fire department, police department and City Hall were all connected via a single line that the tornado axed as it crossed through the heart of Baxter Springs. All three buildings — each of which plays a vital role during disasters — remained unconnected and consequently difficult to reach for several days. They used Voice Over Internet Protocol (VOIP) for telecommunications, meaning the storm halted phone calls. Jesse Haverfield, a fireman and IT specialist, worked with Priest to restore the communications with Disaster Tech Labs. By running a long-cat-5 cable through City Hall, they were able to bring the city back online using the GATR antenna in less than two hours, through capacity from Intelsat’s Galaxy 17 and Horizon 1 satellites.

“People who had been talking amongst themselves, or doing paperwork immediately went to desks,” said Priest. “They logged on and started typing and processing claims for citizens that had been there, licenses for contractors that needed to do work, and they were able to print now because the network connectivity loss had damaged their ability to print from their computers. It was exciting seeing the City Hall come back to life when they realized they had Internet connectivity.”

The antenna remained operational until the end of the week. During that time Disaster Tech Labs got to work repairing municipal fiber and cable, restoring 80 percent of it in 24 hours. GATR now has several employees that are trained for disasters and have both the passports and necessary medical shots to travel abroad on short notice.

“We had a number of experiences that built up to us volunteering,” said Priest. “We now look for an opportunity once a year or so to contribute with this technology. We have the antennas and we have the bandwidth on standby, so we have come to realize that that is an asset that can make a big difference for a community. We budget a set amount from year to year to respond to disasters, and it seems like almost every year there is something on an international level, and something on a local or national level.”

The effects of a tornado endure for sometime. Fortunately Baxter Springs was reached quickly, and the City Hall network has since been modified to allow for faster deployment of backup Internet service. Though no one wants a tornado in their backyard, the best news might be that it affected fewer back pockets. All of the equipment and personnel deployed for this project cost Baxter Springs $0; it was all volunteer. That is undoubtedly a silver lining.