[Via Satellite 05-29-2014] Dauria Aerospace is preparing for the launch of its experimental satellite DX1. The company has already handed over the satellite to Roscosmos’ upper stage and payload adaptor division, NPO Lavochkin, to launch along with the Russian Meteor M2 weather satellite and several other small-sat secondary payloads. The spacecraft will launch aboard a Soyuz rocket set for liftoff June 28, 2014.

Last year Dauria received a $20-million investment from I2BF Global Ventures, a clean technology venture capital firm that has also invested in the asteroid-mining company Planetary Resources and whose founding partner, Ilya Golubovich, also invested in CloudEO. Even as an experimental satellite, Dauria plans to quickly build DX1 into part of a larger constellation.

“At the moment Dauria has several ways to utilize DX1 data,” Mikhail Kokorich, CEO of Dauria told Via Satellite. “First of all, it will become a part of new maritime surveillance constellation that Dauria is starting with partners consisting of the DX1 satellite and two Perseus M satellites that will also be launched in June of 2014. DX1 is Dauria’s experimental spacecraft, which allows for validation of the technologies and software used in its development, which will then be used in future satellites of the company.”

DX1 took 18 months to manufacture at Skolkovo Research Park near Moscow. It has been hailed as Russia’s first satellite to be completely financed and put together by a private company. The expected lifetime is three years, which will be spent in a polar circular sun-synchronous orbit at an altitude of 650 kilometers (404 miles).

“We did not experience any major setbacks; however, we did postpone the launch of DX1 due to a Soyuz launch being pushed back by almost half a year, which we were not anticipating,” said Kokorich.

The DX1 satellite is equipped with an Automatic Identification System (AIS) receiver and, according to Dauria, is the only Russian satellite with this capability. Most ocean faring vessels are required, or at least strongly encouraged to carry AIS transmitters. This presents a major market opportunity for Dauria. The company has already seen interest in available services. 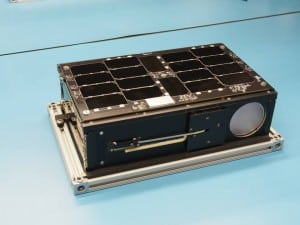 “We have reached partnership agreements with several commercial and government clients including the [Russian] Ministry of Transportation. Maritime traffic data that is currently beyond the reach of existent ground AIS stations is of interest to various government agencies,” said Kokorich.

Dauria plans to complete the first four satellites by the end of 2015. Combined with Elecnor’s satellite, Deimos 1, the full constellation is expected to image the entire Earth on a daily basis by 2016. Deimos 2 is slated to launch on a Dnepr rocket in June 2014.

“We are actively working on the development of Perseus O remote sensing micro-satellite constellation,” said Kokorich. “These satellites will carry high quality multispectral sensors that provide for automated identification of ground features such as crop types, their vigor and stage in the growing cycle. These spacecraft will be able to operate in a single constellation with already commissioned Deimos 1 satellite.”