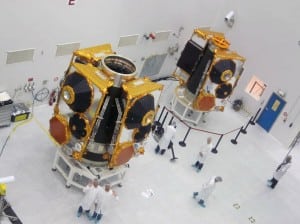 [Via Satellite 05-09-2014] Globalstar recorded a significant increase in its Average Revenue Per User (ARPU) after purging roughly 26,000 suspended or non-paying Duplex subscribers. Rebecca Clary, Globalstar’s chief accounting officer and corporate controller, described the process as “cleansing.” The company’s ARPU increased by 20 percent from the first quarter of 2013 to 2014, up from $28 to approximately $34. Globalstar also announced a new deal with Ecuador’s fishing fleet through its Value Added Reseller (VAR) V-Smart.

“This government program provides for enhanced tracking and safety for Ecuador’s maritime fishing industry,” said Jay Monroe, chairman and CEO of GlobalStar. “This new product is a combination [of a] commercial-grade tracking device coupled with Spot’s life-saving SOS features … we have shipped an initial 5,000 devices, with 6,000 more to be shipped over the next few months. This opportunity could include another 10,000 units by year-end.”

This year marks Globalstar’s first full year in which it is able to market services with its relaunched constellation. Globalstar is targeting new markets in Brazil, Central America and Europe. During the earnings conference call, Monroe said that he expects material growth in voice and data services over 2014.

Revenue for the first quarter was $20.5 million, up 6 percent from $19.3 million during the first quarter of 2013. Duplex revenue for the company increased 21 percent, carrying with it a 6-percent increase in service revenue. Service revenue for Spot and Simplex were relatively flat, but equipment sales for Spot increased by 54 percent, about half a million dollars, due to sales from Spot Gen 3 and the more recent Spot Trace. Simplex equipment sales and revenue was down $0.3 million compared to the same quarter in 2013.

Future revenue is expected from the first shipments of Sat-Fi, Globalstar’s newest voice and data solution that allows access to the company’s satellite fleet using existing smartphones with an enabling app and hotspot. The first customers are government and commercial, but Monroe said the company will soon target the consumer market as well.

Globalstar was unable to comment on the U.S. Federal Communication Commission’s (FCC) Notice of Proposed Rulemaking (NPRM), regarding the company’s desire to use its spectrum located adjacent to the Public Wi-Fi Band. If approved, Globalstar plans to use a 22 MHz band called Channel 14 for an offering called Terrestrial Low Power Service (TLPS). The FCC’s comments were released just hours before the earnings call. Globalstar had submitted initial comments to the FCC at the beginning of the week.

“We are beginning a full review at this time, but at the highest level, we are not seeing anything beyond what we expected,” said Monroe.

“The main objection/concern by commenters is the FCC should ensure Globalstar accept interference in the [Industrial, Scientific and Medical] ISM band of its TLPS service,” Jim McIlree, senior analyst at Chardan Capital Markets wrote in a research note. “This is something that Globalstar itself agrees with. The other objection is there is not enough record to demonstrate Globalstar’s TLPS service won’t interfere with other services in adjacent bands. Neither of these arguments seem likely to derail the process; however, if the FCC decided more testing was needed, Globalstar’s monetization of the spectrum would be delayed.”

Monroe also mentioned that 3,000 rescues have now been initiated using Spot products. Furthermore, the rate of rescues is more than one per day. Globalstar’s Spot product line was one of the highlights of the call.