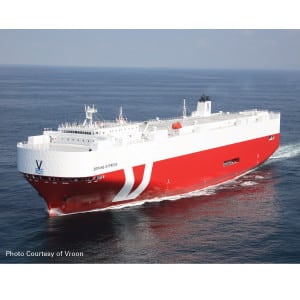 [Via Satellite 03-27-2014] Bandwidth demands for seafaring vessels is growing thanks to the increase in available capacity. Driven by the accessibility of Ku-band, KVH Industries has noticed a shift away from L-band as vessels upgrade their equipment. According to Jim Dodez, SVP of marketing and strategic planning at KVH, all the major sectors of the maritime industry are pushing for greater connectivity.

“There is a huge need for connectivity in all business applications,” Dodez told Via Satellite, “and certainly maritime is one of them. There are significant market drivers that are going to force shipping companies and other people in the maritime industry to adopt improved technology.”

Wei Li, senior consultant at Euroconsult, agreed. “Indeed, maritime is still a fast growing market,” he said. “It has much less regulatory barriers, technological hurdles and capital requirements for the development. We see the entry barrier to provide maritime service is quite low, and new providers emerge almost on a monthly basis. A bit of market rationalization and consolidation, which are happening, will drive the market growing even faster.”

KVH provides satellite-based connectivity services to yachting, merchant shipping, offshore oil and gas, commercial fishing, and government markets. The needs of these markets are strong, as satellite remains the only way to cover vessels that are significantly distanced from land. Yet connected aircraft often get more attention than other vehicles, a preference that, according to Dodez, overshadows the significant needs of other industries.

“A lot of press look at the aviation market and say: of the tens of millions of people that travel by airplane, if each spends X amount, then you have a many-billion dollar market. Ships are more low-tech, widely dispersed, and not as glamorous,” but that does not mean there isn’t a huge business there, he said.

Maritime is a more mature market for satellite communications, which explains the difference in attention. According to Eurconsult’s “Maritime Telecom Solutions by Satellite” report, the systems for maritime coverage have existed for decades. By contrast, the connected aircraft is relatively new. The variation in attention closely follows the amount of new growth in each sector.

The yachting industry is where the largest percentage of KVH’s maritime revenue came from in 2013. These high-end customers represent some of the world’s wealthiest individuals who typically have the ability to adopt new technology at their leisure. While this market is reportedly expanding, other verticals are pursuing satellite services for more functional purposes.

“The offshore service vessel market was one of the early adopters of VSAT services,” said Dodez. “They immediately understand the benefit of connectivity, and for them it’s mainly a size and complexity issue that’s kept it from being widely adopted, but they are adopting it now in large numbers.”

Geographically, Northern Europe is one of the faster adopters of new technology, particularly for the shipping market. The European Union is sponsoring a cloud-based Enterprise Resource Planning (ERP) initiative to manage ships at sea using a combination of vessel and land based infrastructure. Orange Business Solutions is partnering to build satellite communication using an IP-based VPN service. But more often, maritime connectivity develops in an area after a reason is found to increase the presence of seafaring vessels.

“You definitely see [expansion] in areas like Brazil, especially with Petrobras and the oil exploration that’s going on there,” said Dodez. “It’s a huge opportunity, and they actually are rolling out the technology now. Anytime there is a major economic expansion like that, the need is created for modern technology. We’re seeing that on the West Coast of Africa where there is new oil exploration, and we are beginning to see it in some places in Asia. But it’s not the general economy as much as it is the economic activity going on supporting extraction of specific natural resources.”

As the size and complexity of the technology is reduced, KVH expects more vessels to adopt new connectivity services. Smaller vessels can find it difficult to fit all the antennas, modems, control boxes and other equipment below deck without consuming valuable space. With new HTS services anticipated in coming years, even more capacity should soon be available over the world’s oceans.

“L-band systems are physically limited to bandwidth of about 512 kbps, whereas Ku-band systems provide several Mbps, and new generation HTS Ku/Ka-band systems will even bring bandwidth speeds of up to 300 Mbps per vessels,”

Capucine Fargier, satcom consultant at Euroconsult said. “Such systems already existed in the previous years, but the expansion of associated coverage to a more global level, compared to the previous restrictions at a regional level, have also boosted the transition.”