[Via Satellite 12-11-13] NSR’s new report Land Mobile and Handheld Satellite Markets points out that traditional growth in this part of the satellite communications market accounted for 97 percent of global revenues in 2012. By 2022, that number is expected to drop to 82 percent. Though traditional markets are still expected to play a dominant role, growth in the consumer market is making a significant impact. Jose Del Rosario, NSR’s senior analyst and report author, spoke to Via Satellite about what evolution is expected in the industry.

Revenues from this market are expected to more than double from $3.8 billion to $9.0 billion over the next ten years. In the aggregate market, three traditional segments, Comms-on-the-Pause (COTP), traditional handhelds, and SCADA/M2M are responsible for most of the steady growth. Not all growth was as anticipated, however. Military spending remained a huge driver, and is now expected be continue as one in the future.

“What surprised me was the role of military communications at a time when budget constraints, sequestration, drawdowns and other issues should indicate that the military market should decline or be flat,” said Del Rosario. “Currently there are challenges indeed but the market is still growing, albeit at low levels, and is likely to rebound over the mid-term … satcoms will always have a role to play in the marketplace and the military is one vertical where this is most pronounced.”

Military spending in this sector is concentrated around COTP solutions. According to the report, though COTP technologies counted for only three percent of in-service units in 2012, they generated a third of overall revenues. “The key is the ARPU [Average Revenue Per Unit] level,” explained Del Rosario. “For instance, the largest installed base of in-service units lies in SCADA/M2M but the ARPU level is relatively low, whereas military COTP with a low percentage of in-service units has a very high ARPU level.” 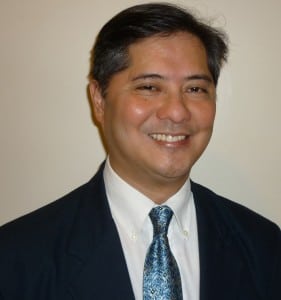 Specialized service requirements by key verticals like the military are expected to drive future growth. Other drivers include continued improvements in form factors, the closing of terrestrial blind spots, higher bandwidth for emerging solutions and lower equipment and service costs. Companies marketing to the consumer segment are expected to pursue many of these drivers aggressively. This in turn will also have an impact on traditional markets.

“I do see them [traditional markets] following trends in the consumer market in order to remain competitive. If we take Spot for instance, it announced orders from the U.S. Forestry Service and the Spanish Ministry of Defense. These government/military agencies are the strongholds of traditional solutions, yet are being penetrated by a consumer offering,” said Del Rosario. “I do see companies taking a closer look at the military market and trying to take some of the COTP revenue share with current and future offerings.”

Consumer products, in addition to growing their market share in traditional areas, have fueled much of their growth through better distribution channels and better consumer education. Growing awareness of handheld satellite applications has spurred on growth. As costs come down, desire for greater connectivity and safety in the consumer market is driving up sales. 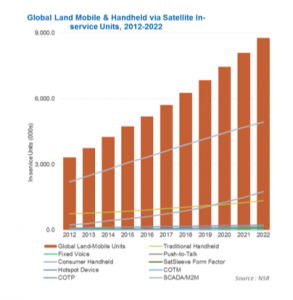 “Safety at an affordable price is the ‘killer app’ so to speak in the consumer market,” said Del Rosario. “The 97 percent non-military COTP applications are spread out that include consumer products like Spot and inReach, enterprise applications for fleet management, cargo tracking, meter reading, high-speed communications for trains and traditional satphones for basic voice/SMS services in remote and far-flung locations.”

Regionally, mobile satellite communication products are expected to gradually take hold in emerging markets. “It differs per market segment but generally the trend or interest in emerging markets mirrors traditional markets in terms of adoption, which can be analogous to the product life cycle,” said Del Rosario. “For consumer products for instance, North America has the highest adoption rate but over time given consumer trends, Asia with the large economies as well as emerging markets in the region, should begin procuring consumer-oriented services at higher levels. The key is the distribution channel. In traditional segments, which follow demand in key verticals such as oil and gas, mining, utilities and others, demand follows where activities lie,” he added. “Over the long term, Asia should once again become the key market for traditional offerings.”