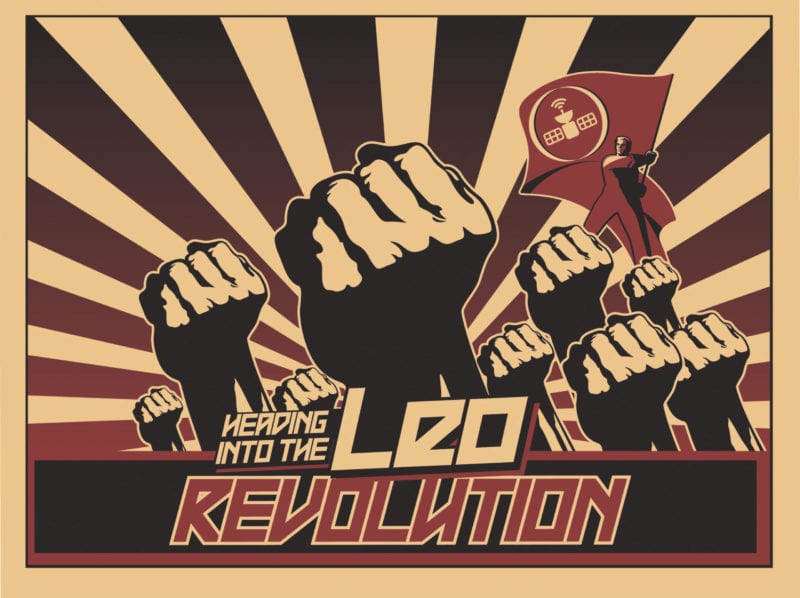 Via Satellite’s February 2020 Magazine Cover: Heading into the LEO Revolution

Last week’s SATELLITE 2021 LEO Digital Forum featured many of the industry’s big hitters in a debate about how Low-Earth Orbit (LEO) satellite technologies and services will shape the future of the industry. Below, we list the 10 most essential moments and talking points to emerge from the series of presentations and group discussions that took place during the one-week event.

Telesat CEO Dan Goldberg kicked off the event with some important updates on Telesat’s big Lightspeed announcement earlier this year. In a keynote fireside chat, Goldberg said the company is planning on making some key launch announcements in the near future. The system which will cost around $5 billion could be a gamechanger for Telesat. Goldberg confirmed the financing is “almost done,” and that it could be in place even in the next couple of months. He admitted that moving into LEO was huge for the operator if it was to remain relevant and a key player going forward.

He also spoke optimistically about developments in ground technology and how he was a lot more optimistic than he was even 12 months ago. Last year, he thought antenna manufacturers were “getting there.” He said Telesat is much more optimistic now. Goldberg said by the end of 2024, he felt they were going to have affordable, capable user terminals that are approximately 50 cms size that are capable of massive throughputs. He expects the user terminal eco-system to be ready in time. This was a very significant development, and a change of opinion, even over the last 12 months. Goldberg hailed the  promising developments in this area. Ultimately, he thinks Electronically Steered Antenna’s (ESA’s) will dominate here.

Gwynne Shotwell, president of SpaceX was named our latest Satellite Executive of the Year, and SpaceX’s presence was felt throughout the entire week. Taking part in the “New World Order” panel, Shotwell revealed details regarding terminal pricing which was a key topic throughout the event. Shotwell said the cost is down to less than $1,500 and a recent second version rollout shaved $200 off the cost. SpaceX subsidizes the cost of the terminal, charging customers $500. Shotwell said SpaceX sees it terminals coming in the few hundred-dollar range within the next year or two. Certainly, SpaceX is confident that it will bring these prices down. Its ability to do everything itself is clearly having a huge impact across the industry, and vertical integration has become a huge topic, and SpaceX is once again leading the way.

OneWeb CEO Neil Masterson made an assured debut and was peppered with questions throughout his keynote. There were many interesting nuggets. It was perhaps interesting, and maybe a little surprising, that he said the U.K. government has no reserved capacity on the OneWeb system yet, one of OneWeb’s main shareholders. However, Masterson admits discussions are taking place on this. The topic of user terminals and cost was also bought up, a common theme around the event. Masterson admits OneWeb will be very focused on improving the economics of the user terminals, because OneWeb thinks that’s the way to broaden the size of the market and to drive market penetration.

He also spoke of his belief that one non-U.S. LEO constellation would be successful and is clearly optimistic that this will be OneWeb. He felt the market was big enough to sustain at least three to four LEO constellations. Masterson said the company also aims to do 10 launches this year and deliver the entire constellation by the middle of next year. It aims to have global coverage by the end of next year. Masterson admitted the company is already thinking about the second generation of satellites, but that he also may hold off a decision here due to hearing what customers want first.

Air Canada is a pioneer among airlines when it comes to in-flight technology. To hear Norman Haughton, director of In-Flight Digital Entertainment, Wi-Fi, Media Sales and Analytics say the minute LEO comes available as a technology for Air Canada to utilize, the airline will jump on that course was quite striking. There was no hesitation, no doubts. It makes you wonder whether other airlines will see things the same way. With mobility such a key target for many in the industry, this will be a fascinating market to watch in the second half of the decade. However, Haughton’s comments certainly shook things up on the mobility panel and it could be that airlines make some huge changes.

Peter de Selding (Space Intel Report), Caleb Henry (Quilty Analytics), Amy Saunders (Satellite Evolution) and Chris Baugh (NSR) took part in a very popular group discussion about LEO’s past and future. Perhaps the most interesting comment came from de Selding who recalled a meeting with an aged Arthur C. Clarke around 20 years ago. In 2000, Clarke said he believed the satellite industry could be dead for a time around the year 2050. Clarke thought there would be an issue in orbit, potentially thanks to these major constellations, that would make it not economically feasible to send satellites through “a rough neighborhood” due to this. De Selding said while he hoped Arthur C. Clarke would ultimately be proved wrong on this, he doesn’t think he was wildly off base with such a comment.

Certainly, it would be catastrophic for the industry to spend many years in the wilderness of there was a major incident of some kind. However, it is clear this is a major talking point.

Also, all of the panelists had reservations/questions for the new business models. The lack of success and the fact that LEO operators were only successful after they were acquired for pennies on the dollar means many are still sceptical about the levels of success some of these new constellations could have.

LEO Could Involve “Hundreds of Thousands” of Satellites

The start of the week saw previous winners of Satellite Executive of the Year (SEOTY) and Satellite Technology of the Year (STOTY) debate the future of the industry. Mark Dankberg, executive chairman of Viasat, spoke of a future where there could be hundreds of thousands of satellites are in orbit. Not tens of thousands, but hundreds of thousands. It still seems hard to conceive. Given this has been an industry that has seen only relatively few GEO orders until recently. However, if Dankberg is correct, the industry will change beyond recognition. Dankberg has long been seen as a visionary in our industry, but his comments about hundreds of thousands of satellites definitely caused a stir.

Space Debris Rises to the Top of Industry Awareness

The event throughout many talking points from the price of consumer terminals to the ongoing issues around space debris. With so many satellites going up, the chances of collisions increasing, this is one of the great issues the industry faces. If Dankberg is correct, and we will live in a world of hundreds and thousands of satellites, this could become a massive issue. The satellite industry which could be the heroes of connecting the world, but ultimately could become the villains; if the industry does not tackle this issue effectively. While companies like Astroscale are coming up with great technology, it is going to need a lot more than this to get to grips with this issue.

Tom Choi, who as we know has long been an outspoken critic of LEO operators like OneWeb, gave some more details on CurvaNet, his big new LEO initiative. He said the terminal for the CurvaNet system will cost $100. It also wants to get a demonstration satellite to launch in the fourth quarter of 2022. The company is also going through a fund-raising activity. It is looking to raise $500 million as part of this funding drive. It hopes to be in a position to launch the first 120 satellites in two year’s time. Choi also revealed is that the company is starting negotiations with other NGSO constellations to help develop a low cost, low power terminals. So, it could be interesting to see Choi through Curvalux/CurvaNet working with other LEO operators. Choi also confirmed the company was in negotiations with a French launch provider, Asian launch provider and North American launch provider, as it looks to get its technical partners in place. These launch deals are likely to come at the end of this year, start of next year, if the company is successful with its fundraising efforts this year.

Have a Little Patience

“The number one technology you need in the space industry to be successful is patience,” Matt Desch, CEO of Iridium said, talking about what is needed for LEO operators to be successful. He said there have been some strange signs in the industry recently and pointed to Google/Alphabet shuttering its HAPS Loon venture as a potentially cautionary tale. Desch spoke of the importance of patience and whether this new wave of investors will be patient over the next 10 to 15 years as these constellations look to build their businesses. Desch said he also expects to see consolidation to take place. He said right now everybody is talking to everybody in the industry, and that people are looking at new combinations. He thinks a lot of interesting activity is taking place in the industry, and that the industry is not going to look the same in four to five years’ time.