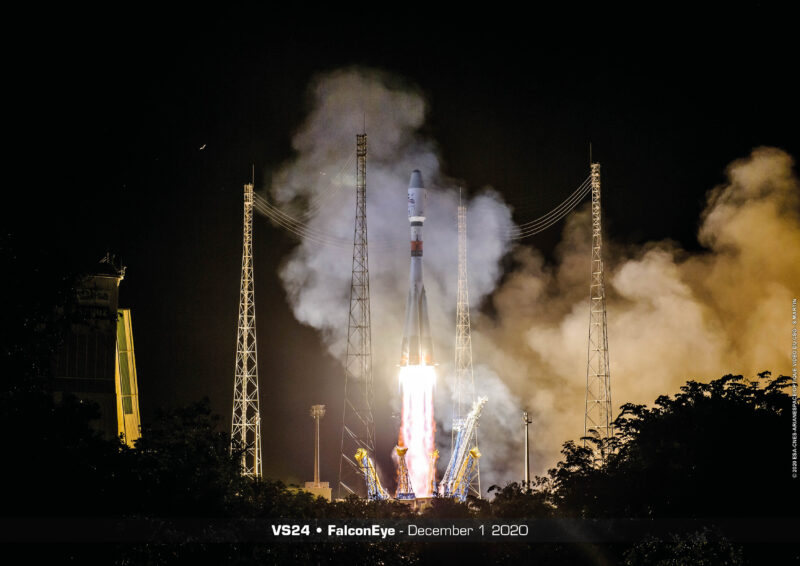 Arianespace VS24 mission. A Soyuz rocket lifted the FalconEye satellite to orbit on Dec. 1, 2020. Photo: Arianespace

Arianespace launched an Earth Observation (EO) satellite for the United Arab Emirates on Dec. 1. An Arianespace Soyuz rocket took off from the Spaceport in French Guiana at 10:33 p.m. local time. The FalconEye 2 satellite was deployed to Sun-Synchronous Orbit (SSO) 58 minutes after liftoff. Total payload mass was 1,340 kg. The launch was successful after having been delayed for months.

FalconEye will support the needs of the UAE Armed Forces and provide commercial imagery. The satellite was a joint product of Airbus Defence and Space and Thales Alenia Space. Airbus created the platform and satellite design, and Thales supplied the optical instrument and the image chain subsystem.

The first FalconEye satellite was destroyed when its launch on a Vega rocket failed in 2019. Arianespace is now investigating another Vega launch failure on Nov. 16, which lost satellites for France and Spain.

Arianespace has two more Soyuz launches planned before the end of the year — Flight ST29 from the new Russian launch site in Vostochny for OneWeb; and Flight VS25 from the Spaceport, carrying a French military satellite.

“A new success for Soyuz! The workhorse launcher has deployed the United Arab Emirates’ FalconEye satellite in orbit on Arianespace Flight VS24. Congratulations and thank you to all our partners,” Arianespace CEO Stéphane Israël tweeted after the launch.