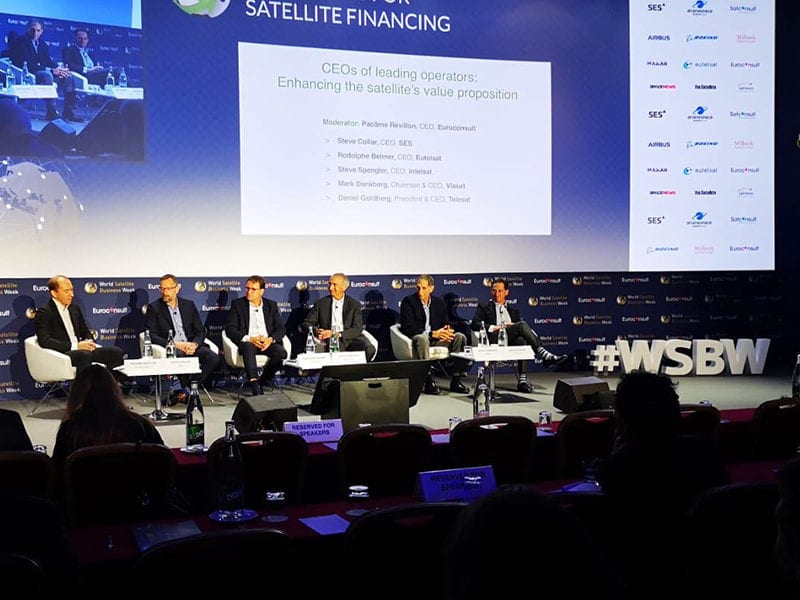 The first afternoon of Euroconsult’s World Satellite Business Week (WSBW) kicked off with the CEOs of some of the world’s biggest operators, SES, Intelsat, Eutelsat, Telesat, and Viasat, talking about the future of the industry. One of the big talking points was Eutelsat’s recent exit from the C-Band Alliance (CBA) in the United States. Rodolphe Belmer, CEO, Eutelsat, was quite vague when asked why Eutelsat left the Alliance saying that “We were a member for the CBA for 18 months. We felt it would be better served if we managed our interests ourselves.” Steve Collar, SES’s CEO took a diplomatic response when asked what SES thought of Eutelsat’s surprise exit. He said, “Rodolphe has to make the best decisions for Eutelsat. We still think this is the best plan for the US. We have made tons of progress in the last 18 months. But, yes it would be beneficial if we were all working together.”

Ironically, given Eutelsat’s recent exit from the C-Band Alliance (CBA), Collar also spoke of the importance of the satellite industry working together particularly as all of the major players are developing complex new systems. Collar talked about the need of great flexibility here.  He said, “One of the biggest threats is fragmentation in our industry. This creates confusion for customers. We are building on open platform. None of us have enough money to build one true network. We have to build networks that are coherent with one another. But, if we all do it independently from one another, I worry that we won’t scale fast enough.”

Other talking points included satellite’s position in the future global communications eco-system. Dan Goldberg, CEO, Telesat when asked about 5G said, “5G, I think, is a term that is used incredibly loosely and abused in some respects from a marketing perspective. We know it is coming. Basically, it is a much bigger, much faster wireless broadband pipe. It is a reflection of all the decisions that we are making. There is more broadband. It is important for us to anticipate the demand for 5G. If we really want our networks integrated seamlessly with terrestrial networks, having a low latency infrastructure will be critically important.”

When it comes to Telesat’s own Low-Earth Orbit (LEO) constellation, Goldberg said he was hopeful that the operator would make a decision by the end of the year in terms of next steps and choosing a partner.

Steve Spengler, CEO, Intelsat talked about the satellite industry’s ability to work with Internet of Things (IoT) going forward. He added, “Are the IoT players ready to embrace satellite? I think there are signs that things are changing. We can help bridge the digital divide. I am very encouraged by that. The work in 5G is critically important. We were not part of 3G or 4G world. That is the challenge facing us. 5G is going to take some time to develop. 5G will be substantially faster than 4G. It will be an engine for creativity and innovation. We need to be a part of it. As standards are built, we need to be in the specs. It will take time to develop.”

While most satellite operators remain generally positive about satellite’s place in the future eco-system, Mark Dankberg, Viasat’s CEO, took a more cautionary note about satellite relationship with the wireless industry. He said, “Cellular operators are the number one threat to broadband satellite. It is difficult for us to bet our futures on a distribution channel that is focused on disenfranchising us.”

Belmer spoke passionately about video. While many talk of new markets in an IoT world, Belmer once again re-iterated the importance of video for a company like Eutelsat. He said, “Video is very solid and resilient. A public debate on video can come across as very negative. It still represents two thirds of our revenues. Video is growing in very important areas. It is reassuring for our company and our industry. We have continued to invest in the video segment. Programming has more and more value in today’s world. That is a driver. The number of channels continue to grow. Also, you have Direct-to-Home (DTH) growing in emerging markets, as well as Over-the-Top (OTT) operators offloading channels onto DTH.”

The economic environment for satellite operators was also discussed briefly. Collar said, “In terms of the economy, our industry is disruptive and changing. But, our customers’ businesses are changing in an even faster way. We need to make ourselves more relevant in the consumer environment.” Spengler also pointed out the satellite industry’s ability to withstand economic headwinds. He added, “I would reflect the large big recession on 2008 to 2010. I know from our experience, we didn’t see a huge impact. I would say that thing that concerns us more relate to protectionism and nationalism in certain markets.”