Why the Market is Ready for On-Orbit Satellite Servicing 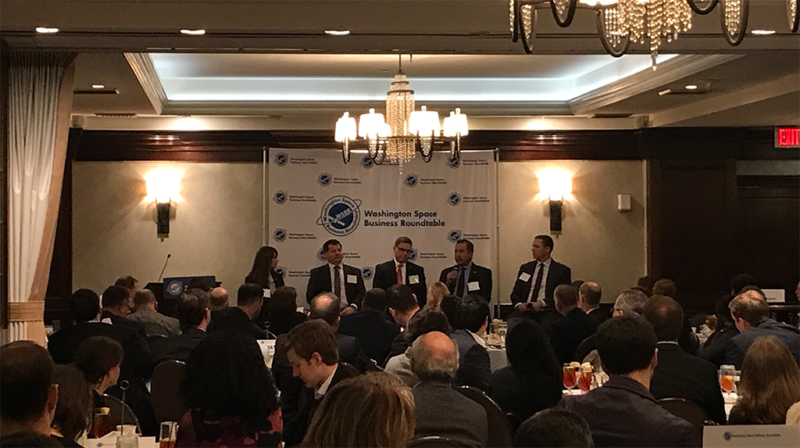 Although the technology driving in-orbit satellite servicing has existed for decades, only now has the market evolved to a point where it is economically feasible as a business. According to a panel of experts at a Washington Space Business Roundtable (WSBR) discussion on Feb. 12, the convergence of lower launch costs and shifting priorities for Geostationary Earth Orbit (GEO) satellite operators has made the idea of in-orbit servicing more commercially viable than in past years.

Tim Deaver, vice president of development for SES Government Solutions, pointed to the dropping cost of satellite capacity as a critical element of the shift. As the industry experiences a downturn in the price of bandwidth (and thus, the revenue any one satellite generates), operators are brainstorming new ways to make the most out of their aging assets, he said.

The panelists agreed this is particularly true for operators that own a limited number of satellites critical to their businesses. Company leaders are seeking new, more creative paths to extend their growth trajectories and, in the process, are softening their traditionally risk-averse postures, said Joe Anderson, director of mission extension vehicle services at Orbital ATK.

This changing mindset coincides with the efforts of new-age launch providers such as SpaceX, which have come a long way in making launch costs cheaper for their customers. “As we see the cost come down for launch, we see the cost coming down for refueling capability. The two points cross and you can make economic sense out of it,” Deaver said.

The proposition seems to be most valuable and attractive to operators of GEO satellites. Such spacecraft are among the most expensive to manufacture and launch, but the majority are also able to operate well beyond their 15-year design lives. The only reason they are usually decommissioned, said Anderson, is because they run out of fuel. If refueling is an option — and if it’s both safe and reasonably priced — then it’s financially sound to squeeze a bit more revenue out of the asset.

It’s true that NASA has been working on technology relevant to such services for quite some time. Already the International Space Station (ISS) uses robotics operations nearly every day to maintain its external payload attachments. Both Commercial Resupply Missions (CRS) 10 and 13 had scientific payloads that were unpacked from the Dragon trunk using robotics, said Al Tadros, SSL’s vice president of space infrastructure and civil space.

But because this market is still so nascent, companies that are currently building on-orbit servicing spacecraft are limiting their missions to relatively simple tasks such as refueling. Currently, Orbital ATK’s refueling spacecraft is compatible with about 80 percent of satellites operating in GEO, Anderson said. It will take time, though, before the company can do more than just that. “Satellites that are there today aren’t enabled for a whole lot of repair missions,” he admitted.

But in the future, as manufacturers begin to build their satellites with servicing in mind, a wider variety of missions will arise. “Even [for] simple things like [rescuing] spacecraft launched to the incorrect orbit — there are opportunities there when errors happen,” said Todd Master, program master of the Defense Advanced Research Projects Agency’s (DARPA) Tactical Technology Office.

Tadros predicts that eventually the industry will launch satellites that are “payload agnostic,” centered around a standardized form factor. “If you can actually start deploying payloads and adding to on-orbit satellites right now, [there’s] huge potential,” Tadros said. “It’s so attractive it could become one of the … fastest growing parts of satellite servicing.”

In the meantime, Master recommended that commercial and government entities come together to establish better standards and ensure they aren’t “jeopardizing this infant industry.” Anderson warned, however, that such regulations should be developed carefully and incrementally. “Just because we can add an extra regulation doesn’t mean we should,” he said.