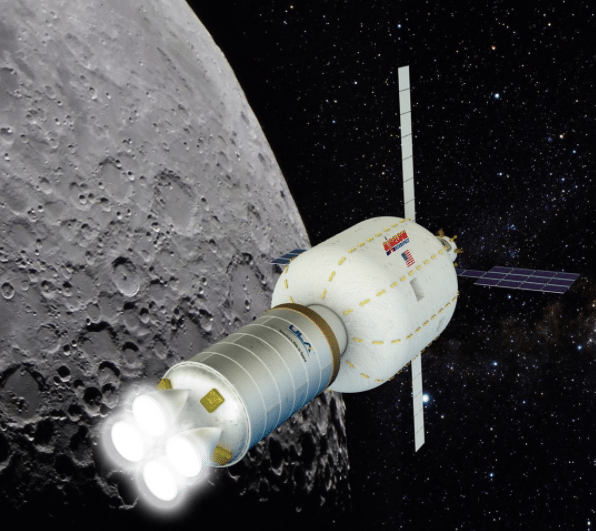 Bigelow Aerospace and United Launch Alliance (ULA) are working together to launch a B330 expandable module on ULA’s Vulcan launch vehicle. The launch would place a B330 outfitted module in Low Lunar Orbit (LLO) by the end of 2022 to serve as a lunar depot.

The B330 would launch to Low Earth Orbit (LEO) on a Vulcan 562 configuration rocket, which according to ULA is the only commercial launch vehicle in development today with a large enough payload fairing to carry the habitat. Once the B330 is in orbit, Bigelow Aerospace will outfit the habitat and demonstrate it is working properly.

Once the B330 is fully operational, ULA’s would use its distributed lift to send the B330 to lunar orbit. Distributed lift would also use two more Vulcan Advanced Cryogenic Evolved Stage (ACES) launches, each carrying 35 tons of cryogenic propellant to LEO. In LEO, all of the cryogenic propellant would be transferred to one of the ACES. The now full ACES would then rendezvous with the B330 and perform multiple maneuvers to deliver the B330 to its final position in Low Lunar Orbit.

The B330 is a standalone commercial space station that can operate in LEO, cislunar space and beyond. A single B330 is comparable to one-third of the current pressurized volume of the entire International Space Station (ISS). According to Bigelow Aerospace, it is developing two B330 commercial space station habitats that could be deployed as soon as 2022 to support the United States’ re-energized plans for returning to the Moon.