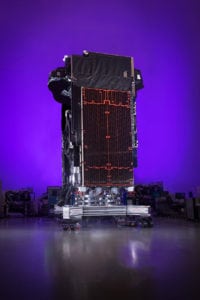 Boeing is building the ViaSat 3 satellites based on this 702 platform. Photo: Boeing.

ViaSat has completed the Critical Design Review (CDR) milestones for the ViaSat 3 class spacecraft. The company successfully completed the payload CDR last week, and when combined with the successful bus CDR, conducted with Boeing in mid-August, ViaSat and Boeing are now moving forward with building, integrating and testing the first two satellites.

The first two ViaSat 3 Ka-band satellites will focus on the Americas and on Europe, Middle East and Africa (EMEA), respectively, with a third satellite planned for the Asia-Pacific region, completing ViaSat’s global service coverage. Each ViaSat 3 class satellite is expected to deliver more than 1 Terabit per second of network capacity, and will leverage their flexibility to direct capacity to where customers are located.

ViaSat is designing and manufacturing the ViaSat 3 payload at its Tempe, Arizona facility, while Boeing is building the all-electric propulsion 702 satellite platform at its factory in El Segundo, California. Boeing will deliver the payload module structure to ViaSat’s satellite integration facility in Tempe where the payload will be installed and tested. Following completion of payload testing, ViaSat will send the completed payload module back to Boeing, where it will be mated to the spacecraft and tested to ensure readiness for launch and the space environment once on orbit.

According to Boeing, ViaSat 3 is the largest satellite in both size and power the company has ever built.