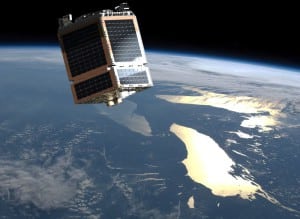 Artist’s rendition of a small satellite in LEO. Photo: SSTL

[Via Satellite 04-28-2016] Telesat President and CEO Dan Goldberg is confident the operator is on the right path to developing a constellation of Ka-band High Throughput Satellites (HTS) in Low Earth Orbit (LEO) to serve broadband customers around the world. Yesterday, the company revealed that it had signed contracts with two manufacturers — Space Systems Loral (SSL) and Airbus affiliate Surrey Satellite Technology Limited (SSTL) — to each produce a distinct prototype satellite for launch in 2017. The two satellites are to serve as trailblazers, allowing Telesat to prove out design concepts underpinning a broader LEO strategy.

“The broader LEO constellation will be very much targeted at global broadband markets,” he said. “We think it will be extraordinarily well positioned for government users, for anybody with a mobility application, and for users in rural and remote areas.”

Goldberg added that the satellite network would be very secure, flexible and have low latency. He said the purpose of the prototypes is not to generate revenue or EBITDA (Earnings Before Interest, Taxes, Depreciation and Amortization), but rather to vet and validate Telesat’s approach to LEO. The company is working with suppliers as well to make sure the components needed perform up to par with its expectations. Goldberg said the first of the two experimental satellites will launch mid-next year, with the second following a little later in the year.

Telesat joins a growing list of companies pursuing high throughput Non-Geostationary (NGSO) ideas, including OneWeb, SpaceX, O3b Networks and LeoSat. Industry titans Intelsat and SES have each partnered with NGSO operators, with Intelsat teaming with OneWeb and SES operating as a stakeholder in O3b Networks. Explaining Telesat’s newfound interest in LEO, Goldberg said the increasing demand for Internet connectivity was the catalyst.

“I think that customers absolutely want bigger pipes at lower prices, which is to say lower cost per bit, so we are seeing an enormous amount of that sort of sentiment in the market, which is why we’ve been moving in the direction of these High Throughput Satellites (HTS),” he said. “It is why we announced yesterday that we are deploying these LEO satellites, because we think that’s another effective way to be responsive to what we are hearing from the market right now.”

Innovation, Science and Economic Development Canada (ISED) helped Telesat secure rights to NGSO Ka-band spectrum with the International Telecommunications Union (ITU). Goldberg described Telesat as having “very favorable ITU rights” for its proposed constellation. He also said that the constellation, while capable of meeting the needs of current and new customers, will not fully replace GEO spacecraft.

“I think it will be a phenomenal solution for a lot of their requirements. I equally think that there are probably other requirements that might be at least for the foreseeable future better supported better in GEO. It depends on application. I still think that we will be operating GEO satellites even if that means alongside of a global LEO constellation,” he said.

Telesat launched its latest HTS satellite, Telstar 12 Vantage, in November 2015 aboard a Mitsubishi Heavy Industries (MHI) H2A rocket. The operator has two more spacecraft with HTS capabilities under construction now. SSL is building the satellites — Telstar 18 Vantage and Telstar 19 Vantage — and SpaceX is the launch provider for both, with missions slated for 2018.

Telesat plans to collocate Telstar 19 Vantage with Telstar 14R at 63 degrees west, expanding services over the Americas, Caribbean, and North Atlantic. Hughes purchased all of the Ka-band capacity on the satellite for broadband services in Latin America. While Telstar 12 Vantage and Telstar 18 Vantage both provide new incremental capacity, Telstar 19 Vantage is all expansion. Goldberg said Telesat will have to reconfigure Telstar 14R slightly for the collocation, but expects this will not have a material impact.

While broadband is a growing focus for Telesat, the majority of the operator’s revenue comes from broadcast services today. For Q1 2016, broadcast accounted for 53 percent of revenues, followed by 45 percent from enterprise and 3 percent from consulting and other services. Goldberg said Telesat has no major changes or renewals coming up with Direct-to-Home (DTH) customers over the next few years. Telesat expects video will continue to be a mainstay for revenue, but Goldberg acknowledge the video market is changing. He said long term, multi-year contracts are still expected to be the norm, but added that Telesat is preparing more versatile services for media customers as their needs evolve.

“The arrangements we have with our customers who are taking entire satellites or payloads on satellites are end-of-life in nature more or less, but the great question is what happens when those satellites reach the end of their life. There have been changes certainly in the multi-video market, whether that’s DTH or cable. I’d say it is a little too early to tell [if that means shorter contracts]. What we are doing right now is we are already developing next generation DTH plans that would have satellites that could support the way both people are consuming television today, which is to say linear TV, but could also be responsive to a more [Video-on-Demand] VOD experience. That is something that we are thinking about,” he said.