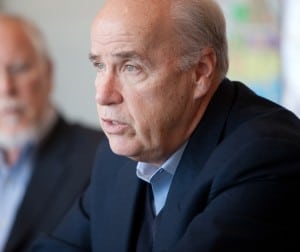 [Via Satellite 05-04-2015] Laser Light Communications, a company that has set its sights on becoming the first Optical Satellite Service (OSS) provider, is hooking up with Australian telecommunications company Optus in a partnership that promises to expand the realms of satellite communications through an all-optical, laser-based terrestrial/satellite network. The optical satellite system offers a path to up data throughput and capacity to unprecedented levels through a planned constellation of eight to 12 Medium Earth Orbit (MEO) satellites while relying on partnerships such as the one struck with Optus to provide access to pre-existing terrestrial fiber and undersea cable infrastructure to evade atmospheric interference.

“The benefit of a laser-based network is the increased volume that comes from optical versus [Radio Frequency] RF. You can get approximately 1,000 times more data capacity in an optical frequency band than you can with an RF system,” Laser Light Communications CEO Bob Brumley told Via Satellite.

When all satellites in the constellation are commercially deployed in 2018, the MEO network will have 7.2 Tb of capacity, according to Brumley. This easily beats out the 60 to 70 Gb that High Throughput Satellites (HTS) are currently able to deliver.

Laser Light’s hybrid network is broken into two elements: an OSS part and the Ground Network System (GNS). The OSS half is comprised of a constellation of eight to 12 Medium Earth Orbit (MEO) satellites, which beam down data to a GNS via a completely optical spectrum. The data then connects to terrestrial fiber infrastructure, such as the one Optus already has in place.

Optical waveforms are highly efficient, but also greatly susceptible to disruption from atmospherics, such as weather — a hurdle that Laser Light is looking to overcome by partnering with regional providers who have a terrestrial infrastructure to back up the system.

“Optus is a unique company in a sense that it, like other regional fixed satellite providers, has a combination of geostationary satellites as well as terrestrial networks. It broadcasts to a regional footprint, like Australia, and connects to its own earth station,” said Brumley.

While Optus can deliver a Wide Area Network (WAN) and has a significant regional footprint in the regions it services, its customer area and data rates are limited.

“Australia is a big country and having an effective and efficient way of meeting our customers’ needs for large bandwidth will be important in the not too distant future,” Paul Sheridan, vice president of Optus told Via Satellite. “This [agreement] allows us to provide a range of broadcast, mobile and Internet into hard to reach places right across Australia, New Zealand and Antarctica.”

“The network that Laser Light brings to the relationship is a MEO constellation, which gives it global coverage in stead of regional coverage. The MEO system, known as HALO, also allows it to pick up data at one Point of Presence (POP) and, after a couple of hops, deliver it to another POP somewhere else in the world,” said Brumley. “When you put this together we have a large amount of data capacity — the equivalent of terrestrial — and, at the same time, we have global reach, which a regional FSS by its very nature does not.”

Laser Light plans to have 100 POPs around the world. In partnering with regional telecoms companies, the optical, hybrid satellite/terrestrial network promises to deliver data transmission rates up to 100 times greater than conventional high-frequency satellite systems with the ability to distribute that data globally. This will allow Optus to distribute larger amounts of data to its customers while Laser Light gains the ability to ride the company’s network of fiber and undersea cable in places where they may need diverse rerouting to overcome weather interference.

“The complementarity between Laser Light’s satellite system and Optus’ ground infrastructure means that, anywhere in the country, we will have the ability to support applications that need the kind of high bandwidths that you just can’t deliver via existing satellite or fiber networks. And we can leverage our local expertise gathered from operating for over 30 years to assist in addressing the different environment compared to that of the radio frequency world,” said Sheridan.

While the new system, which Laser Light has coined SpaceCable, is complicated, the trade off is mutually beneficial: the network allows Optus to deliver more data at faster rates, to more people while Laser Light gains access to more undersea cable and fiber, thus enabling a more reliable network in the face of atmospherics. Outside of the technical advantages, however, partnerships such as this allow Laser Light to leverage relationships that regional telecoms providers have forged with their customers and with each other.

Laser Light’s business model calls for a minimum of 65 percent of traffic traveling over the SpaceCable and 35 percent or less over terrestrial. Terrestrial fiber is crucial to the success of the system and Brumley is hoping this partnership will open doors to more.

“The Optus partnership is a really good template; we certainly hold it out to the marketplace as a template in considering working with Laser Light. For example, if you are a regional FSS provider or a regional undersea cable or fiber operator you may consider a similar arrangement. That deal structure is what we’re trying to put together, at least for the first four satellites of the satellite constellation,” said Brumley.

Through this deal structure, the company can deploy optical communications that offer higher data capability and efficiency, security and ultimately remove some of the pressure from RF systems.

“In a sense, if you can push a lot more data via laser communications you don’t really need more RF spectrum for this purpose, which can be re-tasked for other commercial, wireless and other more traditional communications applications,” he added.