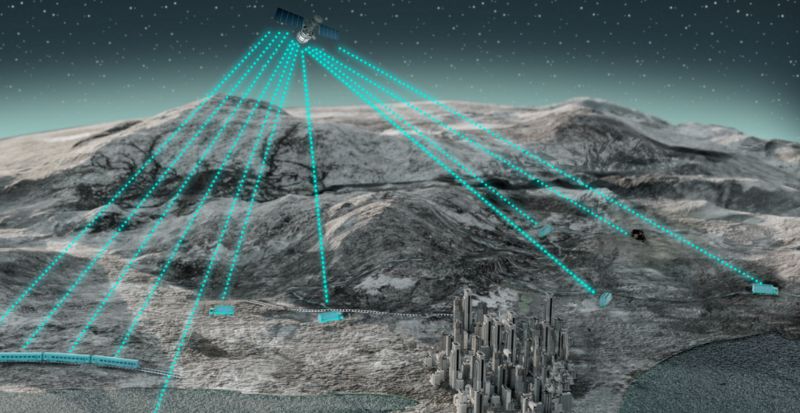 A visualization of a satellite connecting remote devices. Photo: Skylo

Skylo revealed on Tuesday that it is partnering with Sony Semiconductor Israel (formerly known as Altair Semiconductor). Skylo and Sony say they are the first to develop and deploy cellular Internet of Things (IoT) chipsets that can connect via Geostationary Orbit (GEO) satellites, which use the standardized, 5G-ready, NB-IoT protocol. The partnership also makes contributions to Third Generation Partnership Project (3GPP) future specifications, which aims to help the adoption of NB-IoT over satellite. Additionally, these IoT chipsets aim to reduce the cost for IoT applications to connect via traditional satellite networks.

Skylo, which was founded in late 2017, exited stealth mode in January with $116 million in funding. Skylo is venture-backed by investors in telecom and space including SoftBank Group, Boeing HorizonX, Innovation Endeavors, and DCM Ventures.

Skylo is launching commercially this year over South Asia and can be accessed using the Skylo Hub, which is a portable satellite NB-IoT antenna terminal. The Skylo Hub costs less than $100 and integrates with existing machines and sensors.

“For industries with assets deployed all over the globe — including marine vessels, vehicles, and industrial equipment — having access to a ubiquitous fabric of carrier-grade, affordable IoT connectivity that is enabled by Sony’s Altair cellular IoT chipsets is a game-changer,” said Andrew Nuttall, Skylo’s co-founder and CTO. “This partnership ensures our ability to continue to quickly scale the manufacturing and deployment of connector Skylo Hubs to our customers around the world.”