Isotropic Demonstrates GEO, MEO Satcom Link to the US Army 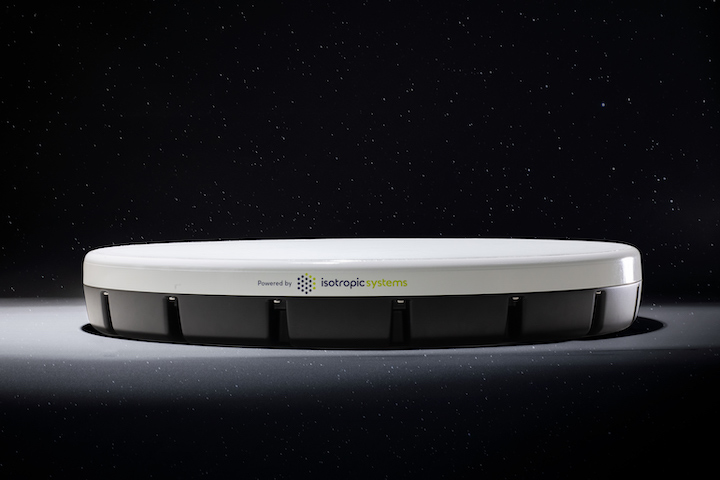 Isotropic Systems has demonstrated its satellite terminal to the U.S. Army, showing that separate satellites in different orbits simultaneously linked to a single multi-link antenna. The test was with the Army, at the Army proving grounds in Aberdeen, Maryland. It was part of the U.S. Air Force‘s Defense Experimentation Using Commercial Space Internet (DEUCSI) program, which evaluates the developing commercial space internet networks for military use.

In the test, Isotropic Systems’ terminal established two simultaneous, full-performance connections with SES satellites in Geostationary Orbit (GEO) and Medium-Earth Orbit (MEO), and seamless satellite-to-satellite transitions. This means that an end user with an Isotropic terminal can use multiple satellite networks at the same time.

This test with the Army follows after Isotropic proved its technology in its own tests with SES late last year, and also follows initial tests for the Army and DEUCSI program last year.

“I think it went flawlessly. We had multiple demonstrations over multiple days. We demonstrated something that no other technology has been able to achieve before,” Brian Billman, chief marketing officer, told Via Satellite “To have this work flawlessly over multiple demos, directly with a customer who was giving us feedback that it is solving some of their most challenging problems — that’s incredibly rewarding.”

Isotropic Systems said this terminal fits in with the military’s modernization efforts to have a flexible, dynamic network. One of the goals of Joint All-Domain Command and Control (JADC2) is to have data seamlessly flowing everywhere at all times. A multi-link terminal offers the ability to switch to a different satellite in the event of interference or congestion on the network.

“When you have a multi-link terminal like we just demonstrated, that has multiple connections, as soon as a jammer pops up or as soon as a blockage happens as they are moving through the battlespace, they already have additional links that are backed up that they can switch and send their data to,” Billman said.

A multi-link terminal can be useful for rebounding after an attack, but it can also affect an adversary’s decision calculus, he said.

“We don’t want [adversaries] knowing that if they take down a specific layer, then they knock down a specific capability,” Billman said. “The more you can unlock multiple communication pathways, it makes your adversary’s decision matrix exponentially harder.”