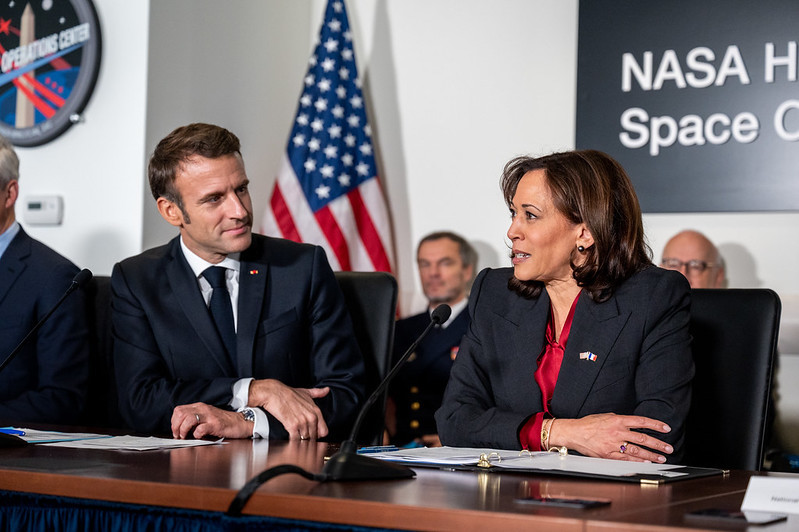 France’s President Emmanuel Macron visited NASA’s headquarters in Washington on Nov. 30 while in the U.S. for a state visit, and met with Vice President Kamala Harris and NASA Administrator Bill Nelson to discuss joint projects and issues related to space.

Harris and Macron celebrated a number of recent collaborations and achievements shared between the U.S. and France in space — most recently, France’s pledge on Tuesday to ban destructive direct-ascent anti-satellite (ASAT) missile tests. The U.S. committed earlier this year to refrain from ASAT missile testing in an effort to set an international norm for responsible behavior in space after Russia’s ASAT test in November 2021.

The leaders also highlighted the U.S. joining the Space for Climate Observatory; creating a Comprehensive Dialogue on Space between the two countries; and France signing the Artemis Accords in June.

“I do believe space is a new place for conflictuality. We have crazy players in space as well, and we have rogue states there, and we have new hybrid attacks,” Macron said, according to the White House transcript. “[The U.S. and France] do have the same commitment and attachment to science and progress. But we do share, as well, the same democratic values. I think building these new rules and setting them together is, for us, extremely important. It is why we decided to join this first set of rules.”

Earlier this month, Harris met with Macron and government officials in France for the first meeting of the U.S.-France Comprehensive Dialogue on Space. At the meeting, officials exchanged information on each nation’s space policies and plans to expand bilateral cooperation on issues like addressing the climate crisis and developing rules and norms for responsible behavior in space.

“I believe space remains a place of undiscovered and unrealized opportunity.  And for that reason, there is so much potential in terms of the work that nations can do there — and, in particular, when we work together based on shared principles and values,” Harris said Wednesday. “The United States and France have partnered on space exploration for more than 60 years.  In this time, we have made great strides.  And yet, in so many ways, we are beginning a new journey together.”