SatComRus 2017: Celebrating the Past with a Look to the Future 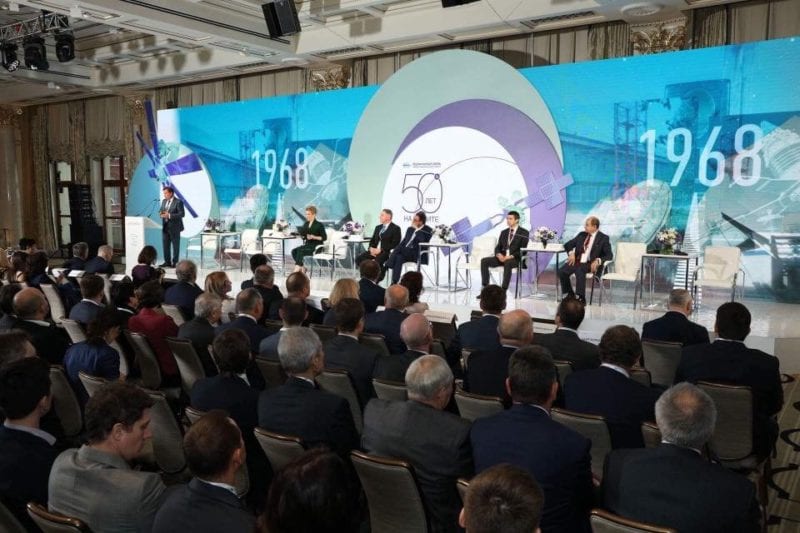 SatComRus 2017 in Moscow took on a celebratory feel as Russian satellite operator Russian Satellite Communications Company (RSCC) celebrated its 50th anniversary. However, the underlying theme of the event was how Russian space companies could build for a more prosperous future. It was interesting that SpaceX was mentioned a number of times from different speakers at the event in Moscow two weeks ago as both an inspiration, and an example of a space company setting a new agenda.

The speaker who best articulated the impact of a company like SpaceX having on Russia was perhaps Elena Krivshich, deputy director at Agat Organization. She said that, while SpaceX wasn’t saying much about the configuration of its satellite constellation, it was undeniably a global system that would be involved in all regions of the world.

“We are facing the risk of lagging behind in terms of small telecoms satellites. SpaceX is going to use its own launch vehicles [to launch its satellites]. All Russian operators have an opportunity to become operators of new constellations or to not let them into the Russian territory. That is the choice of the industry.”

One of the key challenges facing Russia is ensuring its talented young engineers have a platform to develop new business models and ideas. Oleg Dukhovnitsky, head of the Federal Communications Agency (FCA) in Russia, made some strong comments on this subject, saying that the FCA has helped fund four universities in Russia to focus on telecommunications. He said Russia now has more than 35,000 students in this area but, while this has been successful, Dukhovnitsky said getting these students into key positions will be a priority. He said this situation “needs to be improved.”

Dukhovnitsky admitted that satellite is one of the main priorities for the agency. He highlighted the fact that RSCC has around 12 satellites in orbit, and is receiving 40 percent of revenues from international services and 60 percent from domestic services.

Yuri Prokhorov, director general at RSCC, said that in the last three years, the company’s revenues have doubled. “Nobody saw us as a potential competitor in the international market. [Now,] we are working in 52 countries — we are an important element of the worldwide system,” he said.

The launch market was also addressed at SatComRus, and this is where the comparison to SpaceX was at it starkest. Vladimir Solntsev, general director at Energia PJSC, praised SpaceX calling them “one of the new great players in the market.” He called Elon Musk “a master of ceremonies in the technical domain,” but insisted that a player such as Energia could compete, and that it had the ability to “shake the market up.”

Energia is looking to create a new super-heavy launcher. This was one of the key facets of the Russian Federal Program running from 2016-2022. “We are looking forward to the future with much optimism,” said Solntsev.

One of the main government speakers at the event was Maxim Misev, director of the department of infrastructure projects for Russia’s Ministry of Communications. He said Russia has a comprehensive Information Society Program underway and that satellites will be “vital” in developing digital infrastructure. He said the Ministry is aiming to make key contributions to advance Russian operators at the International Telecommunications Union (ITU). Reducing the digital divide over the next few years will a key challenge for the Ministry. “We have prepared the concept of the new digital program. Nine federal bodies have their say. There is often a conflict of interest. It is passing through the Ministry of Economical Development. After this concept, the government will approve it,” he said.

While the opening part of the conference focused on the digital program, as well as the plans to build new satellites, new markets were also discussed, ranging from the Internet of Things (IoT) to connected transportation. One of the interesting new speakers at the event was Inessa Glazkova, executive director at NEBO GK, a Russian company focused on the Communications on the Move (COTM) market. She said NEBO GK had studied transportation markets such as trains, buses, and aviation, and was looking to serve these markets in Russia.

Mikhail Yu. Spodobayev, first deputy general director of NIIR, Russia’s Scientific Research Institute, said the Russian space industry faced challenges in areas such as technology, economics of satellites, politics, and science. “We need to bring down [Very Small Aperture Terminal] VSAT costs for end users. We do not have a state concept of satellite communications. We do not have time to lag behind. One of the main tasks is bringing down the costs for infrastructure. You have the development of 5G. There is an undoubted need for High Throughput Satellites (HTS). IoT and 5G services integration is an area that holds a lot of promise [for our industry],” he said.

There was also a lively debate on the broadcast market in Russia with a number of DTH operators, such as Tricolor TV, NTV PLUS, Orion Express and STV, taking part. The main takeaway is the opportunity to now provide better services to the Far East of Russia.

Igor Kotsarev, broadcasting advisor to the director general at Tricolor TV, said the opportunity to provide services in this region was a significant milestone for the company. “We are now providing a totally new product. It is a digital package that includes TV channels, picture-in-picture, etc. We are offering 230 channels. We offer to the subscriber who takes this package, gets a set of digital services on any platform on any device. We are opening new segments in the market of paid services. The Far East will be in the test for these new services. It is a new entry into the market,” he said.

Kirill Makhnovsky, general director at Orion Express, admitted there has been an evolution of TV watching, admitting that the company was still trying to figure out how young people were looking to consume content. “We need to win this audience over,” he said.

Konstantin Smirnov, director of the digital products department at NTV PLUS, said that while the company had been present in the Far East of Russia, the opportunities for growth were “limited,” so it made no sense for pay-TV operators to rush there. Around 5 percent of Russia’s population live in the Far East and can be seen as being very distant to the rest of Russia. Smirnov said NTV PLUS, which has 12.3 million subscribers, was trying to pick up people who have not heard of satellite before. Smirnov said the demand for 4K services was growing as more people had access to 4K-enabled TV sets.

Julia Shakhmanova, general director at STV, said the industry was “wrongly” treating 4K as a product, rather than a technology. “Selling Ultra-HD is a complicated business. It is a very expensive technology. A lot of money is being invested into Ultra-HD products and services. We don’t think of it as a separate product. Many people were failing to understand they were looking at Ultra-HD than an HD picture,” she said.