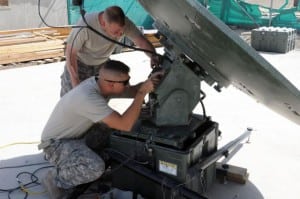 [Via Satellite 01-14-2016] UltiSat, a satellite communications provider with facilities in the Washington, D.C. area and Denmark, is looking forward to growing government activity after a “perfect storm” of sequestration and overcapacity capped the market in the last few years. The company — which provides satellite communications and infrastructure in the form of Very Small Aperture Terminal (VSAT), teleport and mobile satellites services, among others — has historically pulled most of its business from the military and government sector, relying heavily on Department of Defense (DOD) and Non-Governmental Organization (NGO) agencies that require secure and converged managed networks.

While UltiSat CEO Moe Abutaleb admits that overcapacity in the satellite market in conjunction with decreased budgets put a pinch on margins across the entire value chain “starting from the satellite operators, down to the network operators, into service providers like UltiSat, into the system integrators and even the equipment manufacturers” for the last few years, it looks like some of that government demand is starting to come back.

“In the last year, we’ve started to see demand pick back up in parts of the DOD,” Abutaleb told Via Satellite. “Budgets are starting to increase again as we go into 2016. And the needs that are emerging for the government are hard — no longer soft needs. They are hard needs arising as a byproduct of the increased military activity that we see.”

A lot of these hard needs manifesting in the DOD have to do with forward deployments and in moving assets and resources into different parts of the world, according to Abutaleb. Secure communications are one of the first resources needed in these contested environments, he said.

“When it comes to these fairly austere forward deployed environments, often the most effective and efficient form of comms is satellite based,” said Abutaleb.

Specifically, the UltiSat is seeing a pick up in task-order based Indefinite Delivery, Indefinite Quantity (IDIQ) contracts from the DOD in areas such as Europe, Southwest Asia and the Middle East. In March, the company received a contract renewal through an unnamed government agency to continue providing wireless network solutions into Kandahar and Bagram in Afghanistan, tasked with upgrading wireless services to enable converged network connectivity with data rates of 100 Mbps using Comtech EF Data modems. Similarly, the company has seen an award in the last year to provide managed VSAT-based communications network solutions to an multiple unnamed U.S. government agencies.

Going forward, however, Abutaleb notes the demographic is shifting a bit from the traditional areas of DOD focus to new regions, such as Africa and the Pacific.

“In the case of the Pacific, there is increased activity there, a lot of it being airborne Intelligence, Surveillance and Reconnaissance (ISR)-based that is beginning to take place in support of [U.S. Pacific Command] PACOM and the other agencies that are also operating in the Pacific,” he said.

Meanwhile, activity over Africa is picking up as a result of both increased DOD demand as well as for humanitarian missions across the continent.

“In the case of Africa, humanitarian NGO missions are driving Ultisat’s recent activity, and that need just keeps on growing,” said Abutaleb. “We are seeing emerging DOD requirements for connectivity via U.S. Africa Command, AFRICOM and other agencies driving the need for secure and reliable comms in certain parts of Africa. We tend to play in the forward deployed environment for those types of applications, so where our customers go, we go.”

Providing communications for humanitarian efforts across the continent has proven to be less straightforward than dealing with DOD operations, however, as NGO customer tends to be more heavily budget-constrained and relies on the service provider for a greater scope of support. Moreover, regulatory and logistics issues associated with the export and importation of materials often creates a difficult operating environment.

“The regulations are dynamic at the least and ad hoc in some occasions, so you are constantly having to adapt and figure out what the regulations are so as to get a product into and out of these difficult territories,” said Abutaleb. “We don’t see that kind of problem in the case of the DOD.”

The humanitarian sector also tends to call for a multi-country or multi-region solution, where UltiSat is tasked with building networks that are not just on one continent, but sometimes on up to six continents, meaning that one network often has to go across “six or seven satellite beams, three or four teleports and then bring it all to a single data center,” said Abutaleb.

Abutaleb said UltiSat relies on lessons-learned to ensure that materials don’t get stuck in customs for six or seven months while missions trudge on without communications. Working in a difficult sector has proven profitable as the sector limits competition to a certain extent, but the CEO stresses that to continue seeing profits the company has to keep on top of shifting logistics.

“A lot of companies have tried to get into these same sectors but there aren’t really that many that play on a global level, so to a certain extent there is a fairly limited competition for these large, global networks. But, by the same token, they are such phenomenally difficult networks that if you mess up you really pay the price,” he said.